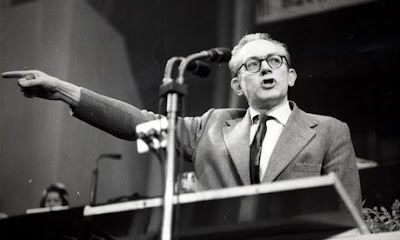 I first came across Michael Foot on a Ban-the-Bomb March from Aldermaston to Trafalgar Square in Easter 1960. (The photo was taken at the Labour Party Conference later that year). I marched with a contingent that were associated with New Left Review and somehow on the way I finished up seated on the floor in a crowded room in the flat of Emrys Hughes MP, where Michael was the centre of attention. I had been a regular reader of Tribune for some time, so I was very much a follower of his political position.

From the mid 1970s I was a regular at Labour Party Conferences and often heard Michael speaking either at Party Conference or at Fringe Meetings. Then in 1986 when I was a Prospective Labour Candidate I met him at the funeral of Frank Cousins, which took place at the Crematorium at Brimington near Chesterfield. Earlier I had hoped to visit Frank who lived in my local North East Derbyshire Constituency during his retirement, but his illness had prevented this.

I then served in the 1987 to 1992 Parliament, which was Michael's final period as an MP. He was one of the few senior members of the Commons who spent time listening to others, rather than just popping in and out of the Chamber to speak. But when he did speak there was no one that was more impressive. This is shown in the winding up speech he had made just before Callaghan lost the vote of confidence on 28 March 1979, which then led to Thatcher's first electoral victory. Michael's speech lasts for half an hour, but it is well worth listening to as a way of remembering him.
Posted by Harry Barnes at 9:42 PM

Marry : From your blog it states that you are aged 20. The item on this thread starts with my first being in the company of Michael Foot 50 years ago. It is the equivalent of when I was 20 reading an item by someone who met Keir Hardie during, say, the 1906 General Election! So it nice to see you have an historical interest.

I am, however, a bit old to start out on the Meteorology Dissertation you advertise. Not least because its not an area in which I have much knowledge.

This kind of information is very limited on internet. Nice to find the post related to my searching criteria. Your updated and informative post will be appreciated by blog loving people.