The Future And Cruddas 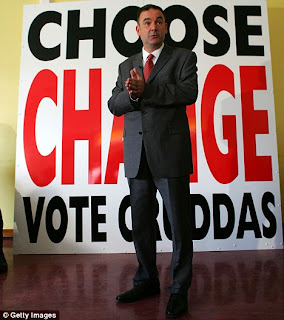 Compass have just published a pamphlet by Jon Cruddas entitled "The Future of Social Democracy". It consists of two talks he gave. One being the Annual Compass Lecture on 9 September 2009. The other given two days later as a Keir Hardie Memorial Lecture in Merthyr Tydfil.

When reading "The Future Of Social Democracy" it is easy to miss the wood for the trees. In the 24 page contribution from Jon Cruddas he refers to 36 writers ranging from Aristotle to a recent publication by Jerry Cohen and also to 24 politicians from Campbell-Bannerman to Gordon Brown. In three pages, he manages to shoot out 28 different policy proposals based on thin or absent forms of analysis (which does not mean numbers of them aren't important). There is, however, a theme that all 88 bits and pieces relate to.

He advocates a vision for Labour which is drawn from the Liberal Collectivist tradition starting with writers such as TH Green and moving on to politicians such as Lloyd George. His criticism of the way New Labour has developed is that it moved away from this potential approach and came to be dominated by the free-enterprise wing of Liberalism. He even attempts to capture socialists such as Keir Hardie and GDH Cole to his banner on the grounds that they were influenced by the ideas of the Liberal Collectivists. Of course they were, but they also transcended the limitations of such approaches.

Cruddas is aware that Labour needs to give people a vision for the future, but his is based on radical liberalism/capitalism and not democratic socialism. Now I realise that a political party advocating socialist ideas might frighten the pigeons in modern society, but a vision is no vision at all unless it can inspire. The trick is to have a worthy set of values, whilst having the political wit to tack and manoeuvre towards them.

Cruddas is leading us astray.

It is a poor day for Labour when the likes of Cruddas become its intellectual torch bearers, more dressed up Blairism is not something people want.

Modernity Blog : Cruddas also has a peculiar approach to politics. He has a very poor parliamentary record over his 8 years as an MP. He does not, for instance, serve on a Select Committee and seldom speaks in the Commons. But these are avenues for him to press his stance (as well as his constituency concerns). At least this means that he is into ineffective "dressed up Blairism." Yet these are chacteristics which Compass seems to admire.