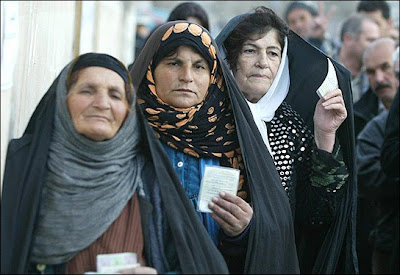 Despite the flaws in the Iraqi political system those who bravely turned out to vote in the face of terrorist dangers have given us all a lesson in the importance of democracy.

UPDATE 4.30 pm The turnout in the Iraqi election is reported to be 62%, which is similar to the 61.4% turnout in the UK General Election of 2005. The turnout contrasts well with (a) that of under 55% of MPs who bothered to turn up for the votes last Thursday which determined some important changes in how the Commons will operate in the future and (b) the 34.7% vote at last years' European Elections.

UPDATE 13 MARCH : Speculation on the outcome of the election.
Posted by Harry Barnes at 11:26 AM

You seem to have overlooked my post below, which I reproduce for you to reply,

you are very mistaken. I have a deep interest in Iraqi affairs, which is why I am curious as to why a supposed Labour Party group like LFIQ carries out PR work for the reactionary, anti-trade union Islamic Dawa Party.

As you know, Maliki runs death squads, has harassed and arrested members of Oil Workers Union, and now has turned on the Teachers Union.

So why do you back Gary Kent and the LFIQ when they, for example, organise stalls and meetings at Labour Party conferences for Maliki's thugs?

It seems that te Ismaic Party's financial support to Kent and the LFIQ are more important than any LFIQ 'support' for Iraqi trade unions.

As I have asked before, and you have refused to answer, how much have Gary Kent and the LFIQ received from Maliki's Islamic Dawa Party?

Coventrain : on the contrary, it is you who have ignored the following in my last response - "I appreciate that if I ever raise matters on this blog about Iraq that you will keep going round and round your chosen roundabout. But I have no intention of following you round on this non-journey any longer."

Given your "deep interest" in Iraqi affairs, we can always discuss the theme of this thread.

And could you explain why LFIQ is having cosy chats with another sponsor of death squads in Iraq i.e. the Islamic Supreme Council of Iraq...

...without bringing up the issue of their military wing, the Badr Brigade.

Did Clive Furness or Gary Kent receive any promises of funding from the Islamic Supreme Council of Iraq in return for PR work on their behalf?

Coventrian : This is what the LFIQ web-site said on 2 February -

'LFIQ Chair Cllr Clive Furness and Director Gary Kent have met Ihsan Al Hakim and Ali Hussaini of the Islamic Supreme Council of Iraq which is one of the main Shia parties.

They agreed to begin a political dialogue on matters of mutual concern. LFIQ seeks such relations with all Iraqi parties.

They agreed on the need to increase commercial and political links between Iraq and the UK with a special emphasis on the need for direct flights and a more liberal visa system so that various exchanges can be expedited.

They also agreed to work together to improve the position of the Iraqi trade unions which the ISCI team said should be allowed to flourish.

They will meet after the Iraqi parliamentary elections on 7 March to review progress.

Clive and Gary said after the meeting in the Commons: "it is very important that LFIQ has good working relations with all the main parties. We don't take sides between them and it is up to the Iraqi voters to choose their own representatives. We are strongly on the side of the Iraqi labour movement and are seeking support for full freedoms for the unions. Support from ISCI would be very good indeed." '

After attacking Gary Kent in comment after comment, you now have a go at Clive Furness also. Clive has a fine record as a founder member of the Committee Against Repression and for Democratic Rights in Iraq (CADRI) which was active in the struggle against the oppression of Saddam Hussein's regime. Your slurs are a disgrace.

If you feel that your own credentials entitle you to attack the characters' of Gary and Clive, then you should tell us what they are instead of hiding your identity. In numerous comments on this blog you have never once written anything constructive.