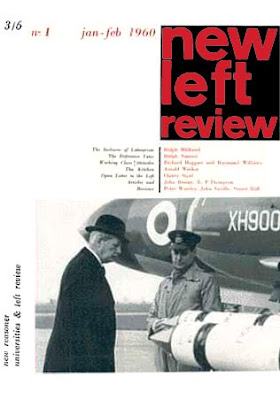 This is the cover of the first issue of New Left Review published 50 years ago when the New Reasoner and the Universities and Left Review merged. But it isn't a photo of my own copy for that is somewhat used and battered. For the issue contains material from Stuart Hall, Ralph Miliband, Ralph Samuel, Mervyn Jones, Richard Hoggart, Raymond Williams, Michael Barratt Brown, John Saville, Peter Worsley, John Rex and E.P. Thompson. They were all members of its editorial board. They were joined by other writers such as Vic Allen, Clancy Sigal and Arnold Wesker. Whilst others on the editorial board included Dorothy Thompson, Alasdair MacIntyre and Doris Lessing. Their books litter my bookshelves.(If anyone doesn't know who these all are, then they can now have a google feast).

Universities and Left Review had rejected the right-wing revisionism which had triumphed in the Labour Party and had developed a cultural critique of consumer capitalism. The New Reasoner was the publication of an oppositional current which left the Communist Party because it was shaken by the revelations about Stalinism and opposed the Soviet occupation of Hungary.

The intellectual fervor behind these two tendencies produced a synthesis that was heady stuff for a young left-wing labourite such as myself. But when Perry Anderson took over the editorship in 1962, New Left Review began to move into a field of specialised Marxist theorising and had less appeal to practical (but hopefully thinking) activists. The original project was, however, still pursued as was illustrated by the production of the "1967 New Left May Day Manifesto" which was edited by what was than the old New Left of Stuart Hall, Raymond Williams and Edward Thompson and re-emerged in an expanded Penguin Special as "May Day Manifesto 1968" with Raymond Williams as the sole editor. 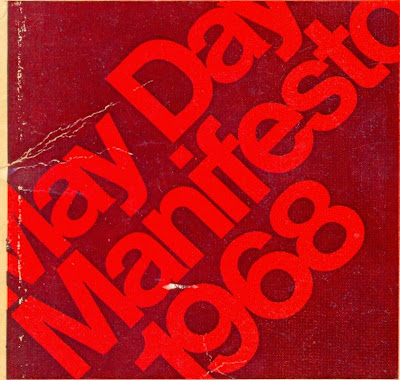 The original New Left Review emerged less than a year after Labour's electoral defeat of 1959. It can only be an old man's fancy that history might be due to repeat itself.