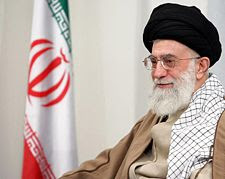 Ayatollah Khamenei is the 2nd Supreme Leader of Iran. He followed on from late Ayatollah Khomeni who was the father of the Islamic Revolution of 1979. One path of reform which Iran could seek to follow would be a process to turn the Supreme Leader into a Constitutional figure-head with no real powers. I conclude this series with responses to the two questions raised at the close of Part 6.

1. What Are The Avenues Of Reform In Iran?

Before deciding what the West's responses should be to the situation in Iran, we need to understand as much as we can about the Iranian people and the situation they find themselves in. The first four parts of this series were structured to that end. For instance, in Part 4 whilst it was pointed out that nationalist, anti-imperialist and Shia Islamic values were a powerful mixture, it was also argued that this did not necessarily produce a monolithic and unchanging society. It is a nation with clear class divisions and other distinctions of interest, including significant struggles for women and workers' rights.

There have already been ebbs and flows in internal Iranian politics even since their Islamic Revolution. Although a Conservative theocratic line has often dominated, there has also been important reformist trends.

We are approaching the 8th election to the Majilis since the revolution. The reformists had influences or majorities after three of the first four elections. Then next year will see a new Presidential election. Ahmadinejad is the 5th President since the revolution. Two of these fell (within the context of their times) into pragmatic/reformist positions, even if they were not always successful. These were Rafsanjani (1989-97) and Khatami (l997-2005).

As shown in Part 3, candidates for the Majilis and the Presidency can be vetted and excluded by the Guardians of the Constitution. Political Parties are also obliged to register and must stand by the Constitution which gives final political control to the religious Supreme Leader, who is not subject to direct appointment nor removal from office by the votes of the people. Yet elections to the Majilis, the Presidency and for Town and Local Councils provide a focus for serious reformist pressures to emerge. The Supreme Leader and the other theocratic elements of the Constitution may feel that they rule by a sort of "divine right", but their power could be eroded via Constitutional reforms which will only come if pushed for in a determined way by the people. If in our history in England, the power of the Monarchy was changed from that of an attempt at absolute rule to that of an eventual figure-head, there is no reason why Iran can't go down a similar path in relation to its Supreme Leader.

2. How Should Those Outside Iran Respond?

A Military attack upon Iran by the West would be a disaster. The national, anti-imperialist and Shia consensus would dominate any attempts at occupation. In 2008, Iran can not be subjected to the coup tactics of 1953.

Selected bombings of nuclear and other targets would also be counter-productive, strengthening the very trends which need to be tamed by internal reformism. The Iranians would also work to see that their nuclear provisions were re-built and protected.

When contemplating lesser actions such as sanctions and patrolling the Gulf, there also needs to be an awareness of how this will play on the internal political scene. The restoration of US-Iranian diplomatic relations has more mileage, as long as this is realistic and no sell-out by the West.

There are clear areas where such arrangements must avoid anything approaching compromises and sell-outs. We have to take actions which will assist reformist and democratic forces to make their own headway in Iran. Human Rights considerations need to be the top priority. This is why the international efforts by human rights groups, women's organisations, student bodies and the trade union movement need to be central. For instance, here is today's agenda.

Western Governments will be in a better position to press such agendas to the extent that they put their own houses in order on the human rights front. A Democratic victory in the US Presidential elections would help.

We need to concentrate on the types of issues which lead to internal pressures for reform in Iran. These relate to matters such as concern about regulations on wearing the hijab, shortages of provisions in the universities, workers whose wages are outstanding, petrol rationing, the impact of inflation, unemployment and a stagnant economy. In supporting the forces for social and democratic improvement within Iran, we have to refrain from actions that will unleash social forces which will make their task more difficult. This does not, however, mean leaving reformers to their own devises, they need our solidarity and support. The trick is working out the practicalities in shifting circumstances - understanding Iran is the prerequisite to undertaking any such tasks. Unfortunately too few people understood Iraq when it was about to be attacked. Which ,unfortunately, applied to many of those opposing the invasion as well as the bulk of its supporters.
Posted by Harry Barnes at 8:35 AM

The SUpreme Leader is elected and can be removed by the 86-member Assembly of Experts in Islamic Jurisprudence who are themselves elected directly by the people.

No one in Iran has an absolute "divine right" to rule. The Shah used to say that about Kingship though.

Hass: I am just back after 4 days in London.

Perhaps I used too much poetic license in the way I drew an analogy between the UK's historical advances to democracy and what type of moves could be the made in Iran. For instance,the Supreme Leader's Constitutional role could come to be transferred to the Majilis and/or the President. Charles I claimed "divine rights", but monarchical power came to be moved into the hands of Parliament - apart from those important prerogative powers which still remain, but are in practice operated by Prime Ministers.

You will see from Part 3 ,I am aware of the points you raise about Iran's direct and indirect electoral arrangenents. Whilst there is a case for saying that at least Khomeini operated as if he had messianic qualities. But I have added scare quotes (etc) around "divine rights" to show that I did not intend to be taken too literally.

Thanks for taking an interest and helping me to improve matters.

Look at the way he presents the half truths:

The Supreme Leader has the final say on everything and is the representative of God on Earth.
He appoints the members of the Guardian Council who then veto who can be the candidates for the Assembly of Experts who then elect the Supreme Leader. The whole thing is a closed circuit.

Let me give you a rule of thumb for deciding what is democratic or what is not, if you are not clever enough:

BE WEARY OF ANYONE WHO STAYS IN POWER FOR TOO LONG!

Islamic Republic is a reactionay religious apartheid, pure and simple!

Azarmehr: Welcome. I trawled through your entire blog last night and appreciate your stance. Might see you on a demonstration some time.