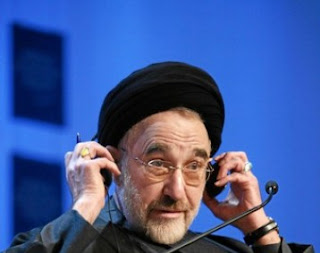 Khatami was the President of Iran from 1997 to 2005. After an obligitary break, he is entitled to stand again for President. But will he? And what other feasible candidate could make the ballot paper and fly the reformist flag?

Now see the "Daily Telegraph" (of all papers)

In the run up to the Iran's problematic elections for their parliament, the Daily Telegraph have been producing a series of telling articles on the politics of Iran. In today's issue David Blair describes the economic difficulties faced by Iran's youthful population. He ends by speculating upon whether the reformist and former President Khatami will seek a come-back and stand for a third term of office in next year's Presidential elections.

Khatami was President between 1997 and 2005. Under the provisions of the Iranian Constitution he was not allowed to stand in 2005 against Ahmadinejad. I was surprised to discover that he is in fact eligible to stand again in 2009. But I now see from the wording of Article 114 of the Iranian Constitution that David Blair is correct. If Khatami can be persuaded to stand it will be a huge boost for the reformers camp in Iran, even if his subsequent policies are again frustrated by the ruling theocracy. For if he stands, it will give the Iranian people a meaningful election to look forward to and will stimulate social pressures for change by the reformists.

Article 114 states "The President is elected for a four-year term by the direct vote of the people. His re-election for a successive term is permissible only once."

I have now corrected my entry alongside Ahmaninejad's photograph here to take account of the fact that Khatami is eligible to stand in 2009.
Posted by Harry Barnes at 1:25 PM

Its funny we see Khatami as the master spin doctor who was an expert at painting a rosey picture of the Islamic Republic for the West.

So many of my friends in Iran were hoping Ahmadi-nejad would become the president, not because they liked him, but because they were so dismayed at teh West's fascination with Khatami. They thought with Ahmadi-nejad at least the world would see Islamic Republic not through the Khatami decorated shop window but as it really is.

Here is my post on Khatami myth busters:
http://azarmehr.blogspot.com/2006/11/khatami-myth-busters_12.html

Azarmehr : I don't think that I have great hopes about Khatami. It is a matter of who can get past the Guardians to be accepted as a Presidential candidate that will allow some sort of contest which reformist can be mobilised around. Even if as previously he is partly blocked and does not even try to deliver, he might help forces to come together which will be able to be built upon in the future. I know that the National Council of Resistence of Iran claimed that nothing changed under him. Torture, political prisoners and the like continuing. Perhaps I just have reformist illusions. Although there might be possible alternative candidates whom I know nothing about.

Its just a futile aspiration to hope for any real change or worthwhile "candidates" within this system. Iranian people need confidence. Right now the image of invincibility the regime has created for itself has resigned the Iranians into thinking that nothing will ever change. This image of invincibility has to crack. There should be more publicity and support for the pro-democracy activists in Iran.

Azarmehr : Well at least we agree on the basic analysis in the discussion on my thread about "The Female Chartists Of Iran" and on Iranian Trade Unionism et al.