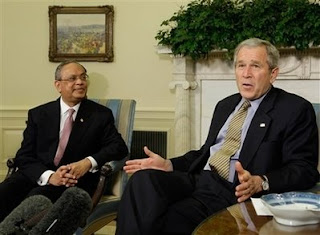 Last Wednesday, President Bush met with Sada Cumber, the first US envoy to the Organisation of the Islamic Conference - a hopeful body referred to in Part 1 and also in "Criticism 1" below.

At the close of Part 5, I listed four major criticisms which the US Administration levels against Iran. I will now examine each of these in turn.

This process is at a pretty low ebb at the moment and Iran's response to the current situation in the Gaza Strip is likely to confirm the Bush Administration in its entrenched position.

On Sunday Iran's Supreme Leader, Ayatollah Khamanei called upon the Islamic people to rise up and for their leaders to hit Israel "in the face with their nation's anger". This follows recent actions which have led to over a hundred Palestinians (including children) being killed in the Gaza Strip in retaliation to terrorist rocket attacks on Israel. He also condemned the US for supporting what he called the "Zionists... unforgivable sins".

In response to the escalating violence in the Middle East, America has deployed USS Cole and two other warships off the coast of Lebanon, where there has been a history of American naval shelling at targets in that country. The tensions rises.

The language seeking to calm the situation has come from the United Nations Security Council who have called for an end to attacks, and by the European Union who have condemned Israel's response as being disproportionate and contrary to international law. The EU has also urged all parties to use restraint.

If there is ever to a serious advance of the Peace Process, then there needs to be pressures from those closest to the protagonists which seriously press for restraint. America's links with Israel need to be used to pull her back from indiscriminate responses. Whilst bodies such as the Organisation of the Islamic Conference (mentioned in Part 1) need to use their position to seek to rein in upon the rhetorical support and military aid which certain Islamic nations and/or splinter groups provide to Hamas, Hezbollah and their equivalents.

Iran has undoubtedly been involved in such activity. At official level this was more likely to be to the fore when revolutionary and theocratic elements initially came to the fore. Some restraints on this action arose in periods when more democratic and reformist elements entered the political game.

It also needs to be remembered that politics is never static. Political changes via both the coming US and Iranian Presidential elections can aid the needed developments.

Outside of the immediate Palestine situation, the US Administration additionally claims that Iran supports violent oppositional activities in nations such as the Lebanon, Afghanistan and Iraq. On the latter this is seen as being via organisations such as the Islamic Revolutionary Guards. Further afield terrorist backing is even claimed in areas such as Latin America around attacks on Israeli Embassies and Jewish Cultural Centres.

Such claims tend to be based on intelligence data and many will see such a source as problematic given the since disproven claims about Saddam Hussein holding Weapons of Mass Destruction. On the other hand, Iran has a track record of seeking to exert militant influences amongst the Shia population of Iraq which goes back to events around the Iran-Iraq War.

President Ahmadinejad has recently completed a two day official visit to Baghdad. As Iran now enjoys sound diplomatic and commercial links with the Iraqi Government, its support for militant activity may decline if it comes to be viewed as counter-productive.

Western Government's will continue to feel a need to build safeguards against Iranian links with militant groups in nations with significant Shia populations. But in acting in this, the West will need to look for avenues which will not push the populations concerned even further into the hands of extremists.

On Monday, the United Nations Security Council passed a resolution placing its third set of sanctions upon Iran whom it claims is constructing a heavy water reactor to produce plutonium and is seeking to enrich uranium. These are key ingredients in the production of nuclear weapons. The sanctions are restricted to those which will hinder or block such developments.

Moving to such a nuclear weapons capability is contrary to Iran being a signatory of the Nuclear Non-Proliferation Treaty. Iran denies that it is involved in such activities and claims merely to be developing a nuclear energy capacity which it is permitted to do under the Treaty.

Russia supplies uranium to Iran for use at its Bushehr power station, but this is done under an agreement which returns the spent uranium fuel so that it can not be reprocessed to produce plutonium. Perhaps to facilitate Russia's signature to the sanctions decision of the UN Security Council, Bush has stated that the arrangement is satisfactory.

Iran's case for developing nuclear power (which it is entitled to do) is that it needs to provide for its future. Its hoped for growth (with an expanding population) could lead to a situation where its annual output of oil for domestic purposes would not meet its own energy requirements. Nuclear energy for internal use would also allow it to expand its export of oil for revenue purposes. Then in an estimated 75 years time its oil will run out, so it needs to prepare for its long term future energy requirements.

Its (unspoken) interest in developing nuclear weapons is that they act as a deterrent against attacks from outside. It is surrounded by US military fire power and four of its near neighbours hold nuclear weapons, including Israel with whom it has a hostile relationship.

The dangers of Iran acquiring nuclear weapons (even without them adopting threats to use them) are that this would undermine the Nuclear Non-Proliferation Treaty, with Arab nations in the region then moving in on the act. Yet only last December the American Intelligence Agency claimed that Iran had stopped its nuclear weapons programme back in 2003.

There is always a problem with the current regime in Iran that pressures upon them (such as the UN Security Council's sanctions programme) will prove counter-productive, with Iran digging in its heels and undertaking exactly that which others seek to prevent. On the other hand, a sanctions programme against Iran will be seen by many as preferable to the bombing by the USA of their relevant installations.

Even although the USA has its own dismal record over Guantanamo Bay, extraordinary rendition, Abu Ghraib prison and the nature of its attacks on Fallujah; it is still the case that Iran has a particularly shameful human rights record. In part 2, I quoted from the "2008 World Report" of Human Rights Watch which spells this out.

Iranian authorities systematically suppress freedom of expression by journalists, editors, academics, students and others. Peaceful protests over women rights, for social improvements and for trade union recognition are suppressed. Iran has a high death penalty rate which includes public hangings (with some until recently being shown an television), the stoning to death of women on charges of adultery and the execution of juveniles. Those who renounce their Islamic faith are open to jail sentences, hard labour or even the death penalty. An Iranian Government Minister has recently defended the torture and executions of homosexuals.

The Ershed patrol (or modesty police) enforce dress codes for women, placing many into detention. Many Iranians are, however, prepared to stand out against such provisions - as is shown here.

Iran is not alone in the operations of the above forms of abuse. Saudi Arabia has a particularly damming record in these areas. This indicates that a common approach needs to be adopted in seeking to overcome such practices wherever they are discovered.

Part 7 will be the conclusion of this series on "Understanding Iran". I will pursue two final questions - (1) What are the avenues of reform in Iran? (2) How should those outside of Iran respond?
Posted by Harry Barnes at 4:13 PM

Actually no large PWR power reactors like Bushehr has ever been used to produce weapons plutonium - possible but much too inconvenient, not really much of a risk. eg the US were supplying PWRs to North Korea under the 1994 Agreed Framework. (NB you mispell Bushehr.)

Rwendland: Thanks for the corrections. The final Part should be posted shortly.

A 1974 CIA proliferation assessment (recently released) stated "If [the Shah] is alive in the mid-1980s ... and if other countries [particularly India] have proceeded with weapons development we have no doubt Iran will follow suit." [1974 CIA SNIE, para 103, page 38]

Despite this President Ford signed a directive in 1976 offering Tehran power reactors and a US built reprocessing facility for extracting plutonium from nuclear reactor fuel. The deal was for a complete 'nuclear fuel cycle'. At the time Cheney was the White House Chief of Staff and Rumsfeld was the Secretary of Defense. In 1967 the US had supplied a highly enriched uranium fueled research reactor.

It seems to me some of the US establishment at that time were quite comfortable with Iran, as they had with Israel, becoming a nuclear threshold state. Though the motivation might be more business than geopolitical. Seems at the time they were only truly interested in forcing the NPT on states the US viewed as unfriendly.

Rwendland : My apologies, I thought I had responded to the important point your supplied. I felt that I had come across aspects of your analysis and then went to hunt it done via google. But when I did not find it, I must have forgot to reply! Thanks again for the information.

The "risk" of breaking the non proliferation seal is created by America's gun ho actions! Even Great Britain has recently vamped up its own nuclear programs, has it not?

I think what deserves mention is the "exact" why of pressuring Iran out of its "allegedly" hegemonic aspirations!

This is not about human rights, or about threatening nations; or about democracy; or about international terrorism; this is about economy!

To make a boogeyman of Iran poor milliards of dollars in the pockets of the military complex industries across the world; the oil will flow from the gullible Arab pockets into the war profiteer's.

A strong Islamic country holding the strait of Hurmoz defies the oil-hungry logic of the western economy!

To ignore the economic crux of the Iran-West antagonism serves to push under the rug the real moral question the West needs to grapple with: "what and who" entitles them to power?!

The stopping of Iran, is to prevent spreading of Indiafication and Chinafication into the heart of the last leg of the ex-colonies!

God forbid if Iran inspires the Arabs to also stand for themselves! Nooo ... that is what people like Johny Guittar are perhaps set to prevent!

please replace poor with "will pour"