The Female Chartists Of Iran 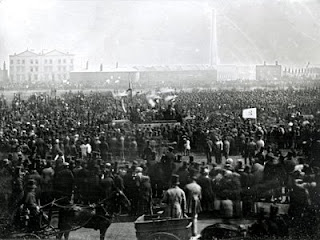 The Chartist Movement in Britain organised three massive petitions in favour of adult male suffrage and other democratic reforms in 1838, 1842 and 1848. Numbers of women also campaigned for the objectives of these petitions as they saw them as advancing the say of working class families. Although Chartism had no immediate success, by 1858 one of its demands reached the statute books with the end of the property qualification for candidates. Other successes were to follow.

The struggle for votes for women became a significant force especially under the campaigning of the suffragettes. The Women's Social and Political Union being founded in 1904. By 1928 the bulk of the demands of the Chartists and the campaign for an equal franchise for women had triumphed.

In Iran today women have the vote, but the electoral system is manipulated to block out numerous reformist candidates who would provide an avenue for pressures for women's rights.

"Women do not have equal rights with men in marriage, divorce, child custody or inheritance. They cannot be judges. Criminal harm suffered by a woman is less severely punished than the same harm done to a man. Evidence given in court is worth half that given by men....in the eyes of the law they are second class citizens."

A female Chartist-style campaign called the Campaign For Equality is under way in Iran (with male supporters) seeking a million signatures to demand an end to discriminatory laws.

International support is being sort for this campaign here. See also the Amnesty International web-site here.

There is no reason why this campaign should not come to have the significance in Iranian politics which the Chartists and the Suffragettes had in advancing democracy, justice, civil rights and social reform in Britain.
Posted by Harry Barnes at 2:25 PM

I think thats just spam advertising Harry, one reason why I moderate the comments on my blog.

By the way, I bumped into Shirley Williams and some of your ex-colleagues in the Labour Party last night:
http://azarmehr.blogspot.com/2008/03/foreign-policy-centre-meeting-in.html

Azarmehr : It looks like spam. I will delete it. Shirley Williams was part of a discussion group on Iran which I attended at the January Fabian Conference. Where I had lunch with Anne Campbell who lost her seat at Cambridge and is now Chair of the Fabian Society. She was on a Newsnight programme last night about Labour MP's parliamentary votes on whether to go to war over Iran. At one time they were going have me on it, but dropped the idea. I fully opposed the war and would have done so even if there had been a second UN resolution. I was on the platform of Labour Against the War. But I resigned from them the following February as with the leadership of the Stop the War Coalition they were far too soft on insurgents/terrorists. I then helped to set up Labour Friends of Iraq whose focus has been on how (in difficult circumstances) to help those in Iraq who struggle to build peace, civic society and democracy (which it is possible to do whether a person supported or opposed the invasion). The people we support are the Osanloo's of Iraq for our best links are with the Iraqi Trade Union Movement. See - http://threescoreyearsandten.blogspot.com/2007/07/submission-to-iraq-commission.html

I think you have correctly identified that opposing war on Iran should not lead to warming to the Ayatollahs. I think its perfectly possible to oppose the war and oppose the Ayatollahs at the same time. I don't know why some people find this a difficult concept to grasp.

The reason I am suspicious of these CASMII and Stop the War Coalition type groups is because under the banner of opposing the war they want to promote repressive regimes.

There are just as many figures in the Islamic Republic who want war, they think they will win it and it will solve all the internal problems.

This is what happened when we attended a Stop the War Coalition meeting in Hackney:
http://azarmehr.blogspot.com/2006/03/iranian-fury-in-swp-meeting.html

The most informative article about Iran related issues. The comments are highly informative and worthwhile to read.

Serendip : Thank you for the fine link. I will print off the article and seek to pursue some of the points that are raised - such as his analysis of opposition political groups. I notice that you own blog is headed with a quote from Kierkegaard as mine is. I will have a closer look at your contributions shortly.