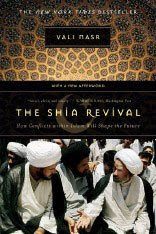 THE SHIA REVIVAL : HOW CONFLICTS WITHIN ISLAM WILL SHAPE THE FUTURE by VALI NASR (W.W. Norton & Company, 2007 edition).

This book has a great deal going for it. To start with, the paperback edition which I bought at Waterstones is beautifully published and is a work which book lovers will enjoy handling. Then, the author, Vali Nasr has a compelling, readable and intelligent style. From the introduction onwards we come across memorable phrases, such as "(w)e live in an age of globalisation, but also of identity politics. It is as if the world is expanding and contracting at the same time."

Above all, the book has a compelling theme. It deals with the Shia of Islam, who account for some 10% of the world Muslims compared to the Sunni's 85%. But as the sub-title indicates we are at a cross-roads in history where the Shia are struggling for their place in the sun. Modern developments in Iran, Iraq and the Lebanon where the Shia have prominence, illustrate this.

Although Vali Nasr centres upon the above major trends amongst the Shia, he provides well crafted and helpful background details about Shia history and its wider international canvas. The significance of the festival of Ashoura is handled sympathetically and the spread and variety of Shia activities is shown to accommodate to (amongst others) Hindu practices in India.

Amongst the insights I gained about Shia politics was that they learnt lessons from the growth of the Iraqi Communist Party which had reached its peak in 1959. The bulk of the labourers who moved into work in the oil industry, Baghdad's factories and Basra's port were Shia. An appeal to their class interests and help for them via Shia social services became part of the religious communities conventional wisdom.

The author takes the side of the moderate, quietest and reflective Shia tradition, rather than of the revolutionary, terrorist and totalitarian tradition. So Sistani's advocacy of the power of the franchise in Iraq (then elsewhere) to extend the Shia's political influence is seen as the big hope for peace and prosperity. He looks to this as an avenue to counter the impact of the Khomeini revolution in Iran. If the only solution is to take sides in this internal Shia debate, then it is (of course) the correct side.

Unfortunately as the book progresses, the author's hopes for the Sistani transformation seem to me to falter in two respects.

First, Vali Nasr sees the Shia's struggle for political space as mainly being directed against Sunni influences. So Sunni politics is presented as being one-sided and oppressive, whether it operates under secular Arab leaders or via bodies such as Al-Qeada. The Sunni are never shown to have their own quietest or democratic-leaning side. Yet whilst Sistani was active from the south of Iraq, Jamal Abul Karim al-Dabban was the senior Sunni religious leader in Tikrit from 2004 until his death in 2007. He was considered to be a moderate. (The nearest Vali Nasr gets to sympathy for the politics of the Sunni camp is his admiration for the influence of King Faysal of Saudi Arabia before his death in 1975.)

Secondly when the first edition of this book was published in 2006, it left us with high hopes for coming Shia democratic and civic practices. However, by the second edition arrived in 2007, the author had to accommodate his views to the seriously deteriorating security position which arose across Iraq following the destruction of the Shia Mosque at Samarra. So he produced an "Afterword" which finds Sistani retreating to his tent to concentrate on religious texts, whilst Sunni-Shia sectarianism bounds forth. If matters have improved somewhat recently (with the tactics around the US surge), they have not yet put Vali Nasr's initial high hopes back on track.

There are only just over 250 pages of text in the book and the two problems I have listed above did not come to my attention until I reached the final 50 pages. In the meantime, Vali Nasr work impressed as a readable and worthwhile introduction to an essential topic which otherwise would be difficult to grasp. For once, I read a book mainly about the Middle East where I didn't become confused by names of the secondary characters, for each argument and analysis fitted into the books overall framework. It was only in the "Afterword" that the author was forced into a fresh situation. It was at least good to see that he did not duck from this task.
Posted by Harry Barnes at 5:00 PM

Perhaps one day if I meet you and have more time, I will explain who Seyyed Vali Nasr and his father Seyyed Hossein Nasr are. How Seyyed Hossein Nasr infiltrated the imperial regime in his capacity as the head of the Imperial Society of Philosophy and promoted the religious uprising in Iran, and how his son Vali helps him in now presenting a more acceptable face of the Islamic Republic to the world.

Just so that you can get the gist of who this father and son are, I wonder if you know that last year, the regime held 12 days of celebration in Iran for Seyyed Hossein Nasr's services.

I don't blame you or other Western politicians. You want to learn about Iran and Shia etc. and the only available source to you are these books which look like they have been written by "Iran Experts" without knowing their hidden agendas.

For an example of these "Iran Experts" please read this post if you have time:
http://azarmehr.blogspot.com/2006/06/ahmadi-nejads-popularity-and-iran.html

Azarmehr : Thank you for the warning and for the link to your item on "Iran Experts". The concerns I had about Vali Nasr were (1) that he had briefed Bush on sectarian violence in Iraq and
(2) seemed to have two dodgy academic posts recently at the Naval Postgraduate School (which is dominated by Vice-Admirals and the like) and Tufts University which was initially affiliated to the Universalist Church.

What is your take on Dilop Hiro, especially his "Iran Today" and Nikki R Keddie's "Modern Iran : Root and Results of Revolution"?

If you ever have the time, I would be happy to receive a short recommended reading list from you about Iran's politics.

The most genuine answer I can give you is to read the very books written by the founders of the Islamic Republic. Many of Ayatollah Khomeini's books are translated in English, his book on velayat-faqih for example, where he clearly states what his ideal political system should be is the best source of finding out what the intentions of the clerics in Iran are.

If you want a quick familiarisation of Iranian history, which will also provide fun and enjoyable reading, I recommend Samarkand by the Lebanese writer, AMin Ma'louf. Its a fictional work but with amazing acurate historical references. It will take you through the times of Omar Khayyam and the assassins of Hassan Sabah, to the Islamic revival movement of Seyyed Jamal-eddin Assadi, to the assassination of the Qajar king, Nasseredin Shah, the constitutional revolution of 1906 and the sinking of the Titanic in a beautiful flawless way where like every good book, you just look forward to reading the next page. More importantly it will demonstrate the 1000 year desire by the people of Iran and their joyous culture which has struggled to survive in the despotism of the religious fanatics who have repressed our true aspirations.
Ma'louf has also another book called Gardens of Light, which is about the despotism of the Zoroastrian priests before teh Arab invasion of Iran. I often wonder if these Ayatollahs are not the true descendants of the same Zoroastrian priests who wante dto control every individual Iranian's life with their theocratic ways.

But just like when people ask me whats the best book I can read about Marxism, I say, Marx's books, the best way to find out about Shiite Ayatollahs, is to read their books, not these detached and some times dubious academics who pose themselves as "Iran experts" and are taking the British and the US adminsitrations for a ride.

Azarmehr : Thanks. I am afraid that it is over a quarter of a century since I read a selection of Khomeini's writings. When I update my reading, I will then place his work on my book shelves next to my selection of Osama Bin Laden's messages. For I believe in knowing what I am up against. I like the descriptions of the other works you mention.

Forgive me for having assumed you had not read Khomeini's books. It is not very often I have come across Iran pundits who have!

Azarmehr : It was only one book, more than 25 years ago. I lent it to a student and never got it back again! So I do need to a refresher.

This was a great post. Since I don't usually read books like V Nasr's, since I assume they are written for the public (and I don't trust the research), I didn't think to put two and two together about Vali Nasr's baba, but I did sense something familiar in the name. And I am never surprised about the nepotism in the media, so why be surprised about Think-Tank and academic nepotism, a form of media sometimes.

I remember seeing his father at some academic event and deciding that distance was the best choice.