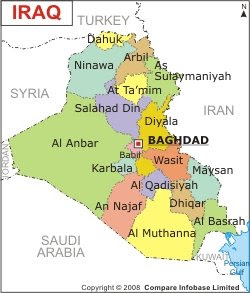 The Iraqi Parliament has agreed to a plan that would see the withdrawal of US troops from their country by the end of 2011 and their removal from the streets by the end of June, 2009. It leaves open the question of whether the US will then obtain future bases in their country. And whilst a referendum will be held about the current decision, this will not take place until July 2009 after US troops have been returned to their barracks. A rejection of the plan would then speed up troop departures and would probably create a political situation in which the US would find it more difficult to establish permanent bases in Iraq.

Whatever the shortcomings are about the referendum and its timing, it does give the Iraqi people a voice in the changed situation that has developed since their last General Election. It will need to be democratic and open, with its decision being honoured. It opens up the prospect of the withdrawal of US troops from Iraq by around the end of 2009 (instead of 2 years later) by a decision of the Iraqi people themselves. We need a democratic decision with the Iraqi people deciding what they want on this matter - one way or the other.
Posted by Harry Barnes at 7:37 PM

Harry, by June, the plan is for the MNF-I to be restricted to only:
1) training and equipping the ISF
2) Special Forces anti terrorist missions (each of which have to be individually approved by Iraq's PM.)

All MNF-I missions in PIC provinces have to be approved by the PM of Iraq on a case by case basis. All of Iraq will be PIC by June.

The IA and IP strongly desires additional training and equipping by the MNF-I. For this reason, I think the referendum passes next year.

There is a problem, however; the Iraqi air force and air defense will not be ready by the end of 2011. They will want additional training and equipping after that point. This would have to be negotiated by the next Iraqi government.

President Obama is opposed to long term bases in Iraq, but might be open to a training mission if:
1) the Iraqis want it
2) the Iraqis meet certain conditions that the US specifies.

In fact, many Kurds and Sunni Arabs threatened to vote againts the SOFA agreement because they were opposed to all MNF-I leaving by the end of 2011, and they didn't like the extent to which the MNF-I were under the command and control of the Iraqi PM. They felt that this gave the PM too much power. (Every MNF-I mission needs to be approved by the Iraqi PM.)

Anand : Thanks for the information. There has been little in the UK media about this development, partly due to a concentration on Mumbai. Even details on the riots and killings in Jos (which I once visited) have been thin. When neither British people or our Government are involved, we get little. It is best to watch forgeign media outlets.