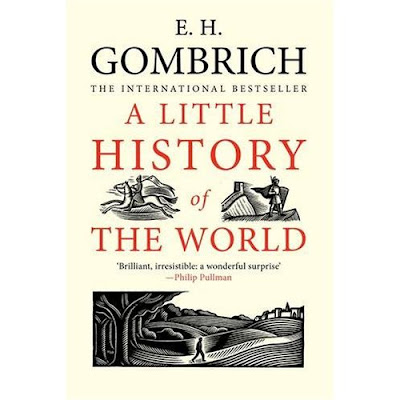 I remember purchasing a copy of the Pelican edition of H.G.Wells' "Short History Of The World" in my mid-teens when I was making my way to a football match at Sunderland's former ground at Roker Park. It was a fine day and as I arrived at the ground early, I sat on the terraces at the Roker End to start reading. I was soon absorbed by its short early chapters with titles such as "The World In Space","The World In Time" and "The Beginning of Life."

I was so taken by the book that when I later arrived in Iraq in 1955 as a National Serviceman without my small library, I purchased a second copy. It is stamped "Coronet Book Shop, Rashid Street, Baghdad", although I suspect that I purchased it in Basra where I was stationed.

Now over half a century later, the excitement I felt when reading Wells' history has now been re-experienced thanks to my reading the book shown above. It is Ernst Gombrich's "A Little History Of The World" which has recently been published in English in a paperback edition (Yale University Press, 2008, £6.99p).

Whilst Gombrich wrote this book for children, adults will find it a delight. Especially, if they have an inquisitive child or grandchild to read it to - gradually, short chapter by short chapter.

The first edition was published in 1936 (the year I was born) in Vienna and it is, therefore, targeted at a mid-European audience. But this itself helps to broaden English reader's horizons - be they old or young.

In Britain, parents and grandparents will always be able to take an excited child to the British Museum, especially to follow up the fine sections on Antiquity.

I would have liked to have seen a chapter on Sub-Saharan Africa and the nature and impact of the Slave Trade, which included the base it provided for much of the initial industrialisation in Britain. And I am also concerned that young girls might be unable to identify with Gombrich's historical sweep as women are sidelined in his history. Why this is so could fruitfully have been faced and more could have been made of the role of women such as Cleopatra, Joan of Arc and Elizabeth I.

But Gombrich's book is to be absorbed and enjoyed, rather than criticised. The final edition includes a chapter based on his own experiences from the end of the First World War when he was 9, up to the fall of the Berlin Wall. This rounds his work off for us. It also has an extra relevance for me in that I was myself approaching 9 at the end the Second World War.

It will also encourage me to return to H.G.Wells. For his own short history is drawn from his larger work entitled "The Outline Of History" which I went on to buy second hand at 8 Shillings and 6 Pence in the days of old money, but which I have only used for reference purposes to date.

But above all it will lead me on to Gombrich. For after he produced the original edition of his little history (which has 40 chapters!), he went on to become the leading art historian of his generation. So I at last need to get hold of a copy of his international bestseller "The Story Of Art" - it has sold 6 million copies to date!
Posted by Harry Barnes at 6:37 PM