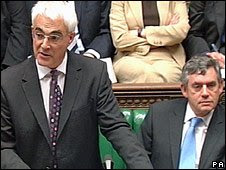 Tomorrow's Pre-Budget Statement should seek (a) to stimulate demand in the economy, (b) with the knowledge that monies will need to be paid back at some stage - although if the package works and demand grows then some of the payment for it will be self-financing. I will judge what is proposed by Alistair Darling to the extent that it fits in with the following pattern. But I won't be holding my breath.

4. Take over houses that have been repossessed and rent these out to their former owners.

E. Work also for International Taxes on currency and other forms of speculation. With the proceeds being used to overcome third world poverty.

On moves to increase demand in the economy, Alistair Darling produced thin versions of the points I made in 1,2,3 and 4 above - although he covered a wider and more problematic range of issues. Whilst there was nothing about a specific Council House building programme (my point 3), social housing was included in the capital spending that is to be brought forward from 2010-11. So perhaps I should be half satisfied with this half of his equation.

On moves to pay for his programme, Alistair included none of my points A,B,D or E. He did include the much trawled and future promise of an extra 5% income tax band for those earning over £150,000. Whilst this is a mild version of my point C, I am aware of the significance of such a change of principle. I once asked Tony Blair if we could not move towards a more progressive element at the top end of the income tax scale. To which he said that we could not go into a general election promising an income tax increase. Gordon Brown answered the same question by saying that nothing was set in concrete. It is nice to see that we are now out of the concrete, even if I did ask my questions over ten years ago!
Posted by Harry Barnes at 8:35 PM