A Twist From Chimbonda 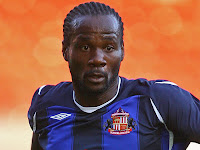 Here is a another picture of Pascal Chimbonda in Sunderland's change strip. He will be found seated on the hallowed turf of local Sheffield FC's ground. The incident occurred yesterday evening when he did one of his trade mark 180 degree turns and twisted his ankle.

He hobbled on for a period and seemingly recovered, but he was subsituted after 60 minutes. I'm not sure whether he was being rested for a place in Sunderland's first team on Saturday or whether he is now on the injured list.

He was playing in central defence in a cup game between Sheffield United Reserves and Sunderland Reserves. The Blades are currently playing their 2nd XI home games on Sheffield FC's ground.

Although Chimbonda played well, I am not sure why Roy Keane (who was at the match) was trying him out in central defence - where his qualities are known. I would have liked to see how he can play in the midfield. For when he plays at right-back, his strength is coming forward into attack rather than blocking opponents.

Chimbonda was a regular in Sunderland's first team at the start of the season, but for some unknown reason he has recently been dropped entirely from the first team squad.

In yesterday's game, Sunderland Reserves dominated the proceedings and won 3-0. From a Sunderland perspective (which I share) there is a fine report here.

I agree entirely with the writer (whom I chatted to twice at the match) that El-Hadji Diouf and Daryl Murphy had poor games. Yet they both came on as substitutes in Sunderland's last premiership game. I had finally come to the conclusion that they should both be substituted this time, when Keane did exactly that. I just hope that his motive was the same as mine and that he wasn't saving them for the next Premiership game.

Due praise is given to numbers of Sunderland's regular reserves in the report I have linked to above. I would, however, also add left-back Nathan Luscombe to the list. He was particularly creative in the second half.

For a Sunderland supporter it was a good night out. Especially as I used my free bus pass to travel the short distance too and from the ground and then only paid a £1 concessionary entrance fee. It wouldn't even pay for the time it took Chimbonda to twist his ankle.
Posted by Harry Barnes at 3:47 PM

Good little player Pascal, I was truly sorry to see him leave the Lane when he did. I suspect that had Sir Harry been in charge he'd have recognised him for his true worth and not allowed him to go. OK he'd never light up the park and be MoM, but he always gave 100% and did more than his share of tackling, well what's allowed to be a tackle these days! I always rated him on a par with Pamarot and Pedro Mendes and Harry was happy to sign them from us.
It will be interesting to see what happens when your club installs a new Manager. If it's bookies favourite Sam Allardyce, I'll wager Pascal will get a long run in the side and do you proud.

Nick : Sunderland have to sort out their first choice defence. Pascal and Bardsley are essentially right-backs. McCartney and Collins are essentially left backs. Ferdinand and Nosworthy are central defenders - although Nosworthy arrived as a right-back. With McCartney injured, the right footed Bardsley has been moved to left-back and the left-footed Collins to central defence. Pascal and Nosworthy have a similar "tricky" sytle and should probably normally be kept apart. Nosworthy being dropped for the Man United game.
It was because of these peculiar permutations that I would have liked to have seen Pascal tested out in the mid-field in the Reserve match mentioned on this thread. His strength is moving the play forward, yet he is sufficient of a defender to track back.
If this makes sense, then perhaps I should apply for the Sunderland job !

I'll have a word with NQ, job's yours pal.