A Lot Of Harlots ? 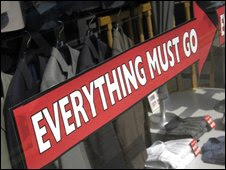 The economic downturn does not stop for breath. Financial and business decisions are made which circulate the world in an instant. Each loss of confidence, spreads its own momentum. So the answer for some politicians is to seek to re-establish growth (and hence confidence) via measures such as interest rate cuts, tax cuts, co-ordination and Bretton Woods-style regulations.


But they have a job on their hands. Not least because free media outlets also have their own worldwide momentum. They feel obliged to probe and undermine each fresh statistic or other piece of news, even if their new concern is diametrically opposed to what they argued yesterday.

So when our dangerously high rate of inflation falls back somewhat mainly due to a fall in petrol prices, then we are presented with the danger of our moving into a form of deflation on the style of inter-war years. This "news" will probably sap financial and business confidence even further and help bring about just what the media is "predicting".

So does this mean that I favour a State controlled media? No, but it would help if we had commentators with a mixture of intelligent and individually consistent outlooks. Instead, we find that Rudyard Kipling, Stanley Baldwin and John Lloyd were near the mark in seeing the mainline press (et al) as "exercising power without responsibility - the prerogative of the harlot throughout the ages."
Posted by Harry Barnes at 11:39 PM

Email ThisBlogThis!Share to TwitterShare to FacebookShare to Pinterest
Labels: Economics

Harry, we are in the midst of the deepest global financial crisis since the early 1930s. It is especially bad in Africa, and oil producing nations. Billions of poor people are suffering enormously.

Anand : Yes. But my point is that a great deal of the media is incapable (certainly in Britain) of entering into an intelligent discussion (which needs to be from different perspectives) about developments. The same outlets cry "horror, horror" whether oil prices rise or fall, without even pointing out that these might be different sorts of "horrors". This adds to the general loss of confidence - as those playing the markets are worried about what their neighbours are then up to.

There is a lack of intelligent debate in every country around the world. You are completely right about the "quality" of the discussion on the global financial crisis.

I wonder when the BOE cuts interest rates to near zero. They need to do so, ASAP. So does the ECB. The Bank of China, Reserve Bank of India, Bank of Korea and other central banks need to aggressively cut interest rates ASAP.

You mentioned inflation in England. What prices are still going up? In the US, prices excluding food and energy are falling (lead by falling housing/rental equivalent prices.)

Anand : In the latest published figures the UK's annual inflation rate fell between September and October, from 5.2% to 4.5% for the Consumer Price Index and from 5.0% to 4.2% for the Retail Price Index. Before the economic collapse, the Government target for the rate of Inflation had been 2%. Currently, the leading areas of a fall in the rate of inflation are housing, petrol and meat prices.

I was in London last week-end. Signs of the downturn were (a) it was easy to find seats on the normally crowded underground on an evening, (b) cheaper (and normally packed) restaurants were almost empty and (c) taxi drivers reported a serious loss of trade. Sterling is also losing out to the $ and the Euro.

When interest rates are cut, we move towards the prospect of having a "negative interest rate" where the rate of inflation (even at new lower levels) exceeds the interest rate (and possibly is even above bank rates). I speculated about some of the problems around this situation on a thread I posted on 20 October entitled "Is It Time For A Negative Interest Rate?". But we are some distance away from this yet - although events move dramatically.