Was Milosevic A Democrat? 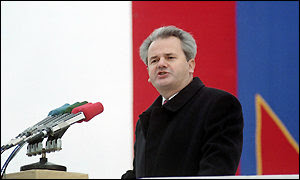 In December 1992 I was one of the international observers at the Presidential Elections in Serbia, which Slobodan Milosevic (left) won against six other candidates. His main opponent was Milan Panic who received 32.1% of the votes to Milosevic's 53.2%. The turnout was only 64.1%, partly due to the fact that the bulk of the Albanian's in Kosovo abstained. If they had voted against Milosevic this would probably have led to a key run-off between Panic and Milosevic, with the latter having lost his aura of invincibility.

On 26 June, Neil Clark had an article published in the "Morning Star" in which he claimed that the system under Milosevic was a "vibrant multiparty democracy". This is, however, a wild exaggeration of the situation. The 1992 election had many pros and cons and could at the time have been viewed as a possible move towards democracy which was suffering from some major teething troubles. But once it confirmed Milosevic's authority, matters continued to deteriorate.

Yesterday, the "Morning Star" published a letter of mine in response to an article by Neil Clark. The letter appears below, using the newspaper's heading-

Yugoslavia was hardly a model democracy

Even if matters were not as blatantly undemocratic as is currently the case with Mugabe in Zimbabwe, it is still a wild exaggeration for Neil Clark (M Star June 26) to claim that "a vibrant multiparty democracy was in operation" in Yugoslavia under Slobodan Milosevic.

Milosevic's practices included strict controls over state TV which was the dominant media outlet especially outside of urban centres, the use of the ethnic card to galvanise support in the face of a growing economic crisis and placing party officials into key roles in the electoral system to help influence outcomes.

As time went on, the democratic shortcomings in Yugoslavia could not just be dismissed as teething troubles.

It is revealing that Neil should stress that, after 2000, many members of the so-called Socialist Party of Serbia moved over to join the Serbian Radical Party with its neofascist ethnic stance.

This is hardly the response of a set of comrades who have been members of an organisation which Neil believes subscribed to democratic socialist values and practices.

Anand: I sent two comments to Neil Clarke on the following thread, but as he never posted them I will have to take that as some form of victory -
http://neilclark66.blogspot.com/2008/06/serbias-socialists-ditch-socialism-and.html