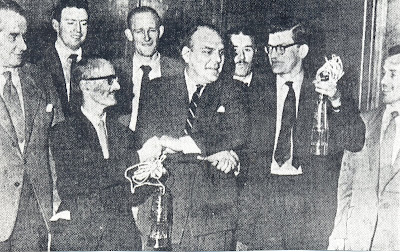 The group in this photo includes Eric Varley who died on Wednesday. He is second from the left and was 27 at the time it was taken. I believe that it appeared in the "Derbyshire Times".

Over a three-year period from 1957 he studied Industrial Relations, Economics and Politics on a Day-Release Course run by the Sheffield University Extramural Department. The photo was taken in Chesterfield and shows a group of Miners who attended the course, presenting miners' lamps to their two final year tutors.

The man holding his lamp up high is the late Royden Harrison. Although I was always very much his academic junior, I took his place in the Extramural Department in 1966 when he moved on.

By the time I emerged on this scene and from 1964, Eric was already the Member of Parliament for Chesterfield. Eventually I was to become MP for a neighbouring seat which almost encircled Chesterfield, but this did not coincide with Eric's time as MP. He and I were also full-time adult students at Ruskin College, but again at different times.

Given such shared experiences, we might have been expected to have met and communicated far more than we did. This distancing arose to some extent because we saw each other as belonging to different wings of the Labour Party and because our paths kept missing each other. I feel that this was my loss.

I did listen annually to his speech at the Chesterfield May Day, heard him address a Rally in Chesterfield for the "no" campaign in Chesterfield during the referendum on the Common Market and made the arrangements with him for his talk to our then local Fabian Society in Dronfield, which is situated between Sheffield and Chesterfield.

The period when we were both at Westminster at the same time was between his appointment to the Lords in 1990 and my retirement as an MP in 2005. But we did not move in the same circles and he was not a regular attender.

We did, however, travel together by train to London if we met by accident and always talked non-stop, he also came to sit next to me at a handful of events - including a Conference of the Regional Labour Party.

He was always keen to find out what I was picking up about politicking in the Chesterfield Labour Party and I was happy to tell him. His own past links seeming to have discontinued.

When he resigned as MP for Chesterfield, he triggered the 1984 By-election which led to Tony Benn's return to Parliament. He had every reason to dismiss the thought that his resignation would have such a consequence. At the time. the Labour Party in Chesterfield had no tradition of lurching to the left. That he had handed the seat over to the very Bennism he had fought within the Labour Party, must have come to him as a shock.

He had held significant front bench posts and had been Treasurer of the Labour Party, so it has always been a mystery in this area as to why Eric resigned from Parliament at that time although numbers of his critics would dismiss his move with the simple claim that he had "sold out".

I feel that we should consider two alternative factors which are not unrelated.

He had been an MP for 20 years. Enough can be enough. I was ready for retirement after my 18 years. On the other hand I was 68 years old. Eric was only in his early 50s, not much older than when I first became an M.P.

Then the political tradition that he was part of was starting to lose its leading role in the Labour Party. There were a couple of options which he would never associate himself with.

First, there was the breakaway by the "Gang of Four" to found the Social Democratic Party which seemed particularly dangerous. It was led by former Labour politicians who seemed to him to be hopelessly romantic pro-Europeans and were also cutting themselves off from what he had grown up with - connections to the Trade Union Movement. He was an NUM Branch Secretary at 23 and became the Chair of the Trade Union Group of Labour M.P.s.

Secondly, there was the Bennite Campaign which seemed to him to be impossiblist. He had himself started out as a left-winger and in his early days was the favoured son of Bert Wynn, ex-Communist and Secretary of the Derbyshire Miners. But by Eric entered the Commons at 31 his political commitments were still maturing. It should not be assumed, however, that he retained little from his Derbyshire NUM past. He saw his new found gradualism* as fitting in with their interests and values. If he was now more right-wing, he was still firmly a labourite. It is something which differs from the later New Labour coup.

My argument might seem to be confounded by the fact that Eric resigned when Kinnock had just become leader. But where did that put Labour in Eric's eyes? Kinnock (whom he seems to have distrusted) still had to battle to overcome Militant and the Bennite left, but it must have seemed that this would be at the price of a great deal of long-winded utopian socialist rhetoric. Eric had run Dennis Healey's unsuccessful campaign against Michael Foot. The consequences of that defeat seeming to Eric to be the electoral humiliation of 1983. It must have looked to Eric as if the next electoral victory (even with Bennism tamed) could still be a couple of decades away. And would it then (whether it was right-wing or left-wing) be recognisable as a labour platform?

I regret not having spoken to him more, perhaps there was something to understand about the feeling he had in his guts.

* = Note added 2 August. Eric would know all about the theories of the Webbs. His day-release tutor Royden Harrison was a leading expert on their (and other) socialist theories.
Posted by Harry Barnes at 10:34 PM

Harry, this is a lovely piece.

In retrospect many of the uncomradely things we did to fellow comrades leaves a sour taste in the mouth and a sad memory in the heart.

Given the commitment to trade unionism and the working class I now cringe to think we regarded people like Eric in such a dim light. In comparison to the bag carriers, careerist solicitors and think tank boffins who now 'emerge' from our selection meetings, Eric was positively left wing.

Bob,
You are correct. I have come to appreciate that those on Labour's right wing like Gwyneth Dunwoody, Dennis Healey, Roy Hattersley (before he left the Commons and moved to the left) and Eric where at least Labourites. A sensitive left approach would have been to seek to come to terms with the right-wing so that the left could retain a decent space and place within the Labour Movement.

I feel that those of us who were in the ILP (as a Publications Group) came to realise something of this. See, for instance -
http://threescoreyearsandten.blogspot.com/2007/03/two-worlds-of-roy-hattersley.html