My Bias On Byers

An Andy Davy cartoon of 21 August 2006 when Stephen Byers came up with the idea of solving our problems by cutting inheritance tax. Gordon was still Chancellor. 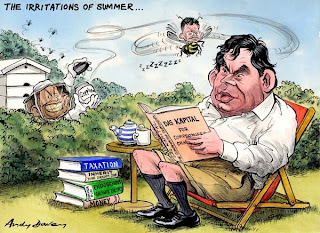 Before it was absorbed and included in this article, The Observer gave today's front page coverage over exclusively to comments from that political has-been (and never-was) Stephen Byers in order to continue to stir the pot against Gordon Brown.

The Observer states that Byers "told The Observer it was time for radical new ideas big enough to capture voters' imagination and claw back marginal seats".

Is Byers suggesting that Brown should emulate his friend Tony Blair with equivalents to (a) the embracing of a pro-capitalist agenda, (b) the invasion of Iraq without understanding anything about it and (c) the destruction of Britain's manufacturing industry?

We have memories in this area over Stephen Byers' clear failure as Secretary of State for Trade and Industry to take moves which could have saved 700 jobs at Biwaters in Clay Cross in the year 2000. Matthew Carr in Red Pepper covered the shameful issue tellingly in their issue of January 2001. Unfortunately I can't find a link to the article, but I keep it on file.

I am no great enthusiast for Gordon Brown's political stance, but I am very much aware that it is Stephen Byers' form of extreme New Labourism that it at the root of Labour's current problems (problems which the media are stirring for its own news-making and ideological purposes). For as I said to Red Pepper, "you can try to reconcile the free market and social justice, but in the end you have to come off the fence and when they (New Labour) do so it is in the interests of capitalism".

It is not that I am biased against Byers, its just that I am not bothered who stops him.
Posted by Harry Barnes at 7:16 PM

I agree Harry. The Blairites have never given up on the theory that the party lost first its members then its voters because they weren't Blairite enough - the 'we didn't go too far enough' theory.

I'm sure they'll blame Brown and (even more) the left for their probable loss of the next election but the fact is it was Iraq, PFI, over-priced, tax-payer subsidised private railways and trade deals that let dictatorships abroad exploit their own people and put ours out of work that are the problem.

It's always been policy, not personalities that was the problem (however many times John Rentoul claims the opposite).

I think Brown got a honeymoon because people thought he might reverse some of Blair's policies - instead the only policy changes he made were to scrap super-casinos (good move but not a central policy issue) and scrap the 10p tax rate he'd introduced himself (crazy and wrong) - so he rapidly lost sympathy with both people on low incomes and anyone with a sense of fairness.

People support "fairness" and policies for "the many not just the few" - the problem being that New Labour has adopted lots of tory policies that are unfair and hurt "the many" for the benefit of a "few".

Calgacus: Now we have Blair's leaked memo which was probably written in order to be leaked. The more this goes on the more we are driven to "defend" Brown. Even your own sensible approach of concentrating on policies and not personalities has its own pro-Brown element attached to it. For it indicates that we keep away from a leadership contest to centre on issues, at least until after the next General Election. I agree, but does that make us reluctant Brownites? On the other hand we can do our thing and leave others to do the categorising.

Yes that memo was quite amazing in showing how much brass neck Blair has - the man who got us into Iraq through ignorance and vanity accusing anyone else of 'hubris and vacuity' is amazing.

If forced to choose between Brown and any Blairite i'd prefer Brown - but their policies are pretty similar so i'd prefer someone who'd move from war to aid and reconstruction on Iraq, rule out war on Iran, scrap PFIs and nuclear power, renationalise the railways, bring in more progressive taxes and a law to make companies take on apprentices to reduce unemployment.

If Brown would do all that i'd support him but he's never given any sign he would as Chancellor or PM so i can't really back him.

Calgacus : You are correct. I have linked to your blog. All that we can do is spread ideas and understandings. It is better than sitting around waiting for Godot. It is why the two jobs I now have in the Labour Party are both those of Political Education Officer and I have given up politicking.