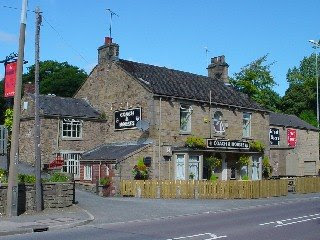 In less than a fortnight, Sheffield FC have played six pre-season friendlies on their home ground. So I have had good value for the pensioner's pre-season ticket I purchased.

There have been 20 goals so far. Unfortunately, I missed eleven of these.

Politics robbed me of seven. For the only game I missed was a 7-0 victory over the Welsh team Newi Cefn Druids. Instead, I went to my first full Labour Party Constituency General Committee meeting since I retired as MP over three years ago.

The reason I have kept away and concentrated on activity in my local Labour Party in Dronfield is that I did not want our new MP (Natashca Engel) to feel that her predecessor was sitting in judgment on her. I would have hated the equivalent if it had happened to me - which fortunately it did not.

I had been to sections of two previous meetings, but only (a) to give a talk based on this and (b) to listen to another speaker Barry Johnson. Both events were about Labour History and not contemporary politics.

But now that Natashca has her feet under the table and has just been re-endorsed as our Parliamentary Candidate, I have returned to the scene of my earlier crimes and have become the Constituency Political Education Officer.

The first time I held this post was back in 1970. Seventeen years later I became the local MP. At that rate I will be returning back to the Commons when I am 89, as long as we still have a Labour Party left. Natascha will then have had a 20 year spell as MP and will probably have had enough.

The reason I missed a further four goals during the six games I did attend is due to the glories of summer afternoons and evenings at Sheffield FC's ground. The trick is to spend half-time and other periods at the Club's fine pub which abuts the ground. It is even better with good company, fine weather and outside seats.

This habit means that I was slightly late back for most second half kick-offs and missed those goals. The worst was for the game against a Sheffield Wednesday XI where each side scored so closely to each other from the kick-off that as I returned to the ground a loud speaker announcement was telling me who both goalscorers were.

Reports on all seven games appear here (with photos). All that I will add is that our new goalkeeper Steve Hernandiz has been sensational, admired by no-one more strongly than York City supporters many of whom had come over by train. From an earlier fixture they already appreciated the attractions of our Coach and Horses pub. Then Steve Hawes whom we have just signed from Worksop Town has been a mid-field inspiration.

Yesterday evening was typical of the summer and socialising advantages of these matches. As is now normal, I was with fellow Labour Party activists, Janet and Dave Hill. Janet is County Councillor for Dronfield North and Dave is a former Mayor of Dronfield.

We then met up with John Dunn whose political pedigree goes back at least to key roles he played in the Clay Cross Rent Rebellion from 1972 and the Miners' Strike of 1984. Poacher turned gamekeeper, he had a long spell as County Councillor for Clay Cross and came to Chair the Derbyshire Police Committee (Correction 6 August- it was the Committee dealing with the Fire Service, so its not as good a story!). I dare not say more about him as he claims to read this blog (Correction 6 August ,I accept that he does) - but for the football and not the politics! (So much for the impact I had on him when I was his tutor on a Derbyshire Miners' Day Release Class in 1975-76.)

He was with Len Badger the former Sheffield United full-back and star, whom I first started to watch from the terraces at Bramall Lane when I arrived in Sheffield in 1966.

What could be better than a bit of "all our yesterdays", sunshine and a good pint. The surprising thing last night is the the Chesterfield fans nearly all missed out on the half-time dash to the Coach and Horses. That made it easier for the regulars to get served. But perhaps the York City fans should have a word with them.
Posted by Harry Barnes at 3:05 PM

Harry - just to prove I do read your blog. One point of correction - I chaired the Fire not the Police Authority.

John : I see that you have a blog facility and no blog. It must be because of your newly found respectability. It made a better story if it had been the Police Committee, but I will correct my error. See you around.