Washington Or Moscow, Or Neither? 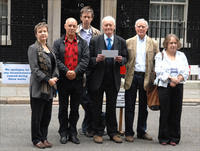 This photograph appears on the front of today's Morning Star. It shows what the paper calls Anti-War Campaigners who are about to hand in a letter to 10 Downing Street protesting about US and British actions in relation to Georgia. The Campaigners led by Tony Benn are in fact spearheaded by the Stop The War Coalition.

What they say in their letter is only at best one side of the truth. But these strange Anti-War Campaigners then fail to go on to condemn the actions of Russia for their invasion of Georgia and for their subsequent hard and dangerous line. I doubt whether they will now be delivering a letter to the Russian Embassy condemning Moscow's actions.

The Socialist Workers' Party used to have a slogan "Neither Washington Nor Moscow, But International Socialism". It is a pity that the bulk of today's Revolutionary and Hard Left don't re-examine the contemporary logic of that position.
Posted by Harry Barnes at 2:05 PM

“But these strange Anti-War Campaigners then fail to go on to condemn the actions of Russia for their invasion of Georgia and for their subsequent hard and dangerous line.”

Where would the fun be in taking the side of the underdog, Harry? We all know how the StWC arrived at their conclusion: find out which side the United States is on and then oppose it. It is a sad state of affairs but thankfully these people are becoming increasingly irrelevant. Supporting Islamist butchery was bad enough. Now they can add Russian imperialism to their list of worthy causes.

Johnny Guitar : I was in a book shop in Chesterfield yesterday and I nearly asked them to place the Benn Diaries in the fiction section.