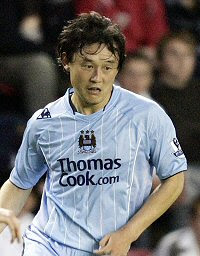 Sun Jihai (left)in his Manchester City days, who had a dominating game for the Blades against Sheffield FC yesterday evening.

Pre-season friendlies can be confusing, especially when it comes to non-league football. For whilst the media keeps us informed about the comings and non-goings of the Ronaldos, just what has been happening in the transfer market to the team who play just down the road?

When you turn up for a pre-season game (without an electronic score board to help you out), you have a job recognising who's who.

I watched my team Sheffield FC lose 2-0 to Tamworth on Wednesday and 4-0 to Sheffield United yesterday evening. Thanks to this web-site which contains reports of the two games, I have finally worked out that with the ample use of substitutes we used 20 players in the two games. 8 of these were entirely new to me: 5 being new signings and the others emerging from the Youth and Reserve teams.

Furthermore from my analysis of the match-day programmes, 7 of last years squad have gone. These include Lowton, a hero of our last competitive game when we beat Worksop Town in a Cup Final. It added to the confusion that he turned out for the Blades. But to be fair, he had been on loan from them last season.

Tamworth play 2 leagues above us in the non-league pyramid. From the comments of their supporters in a sparse crowd of 140, their make-up was also confusing with two trialists pulling out all the stops and leading us a merry dance.

I was with Dave and we made it to the Coach and Horses for a half-time pint, with Tamworth leading 1-0. When we returned to the game, we were only about a minute late for the second half kick off and we hoped for a second half equaliser. But it never came.

Imagine our surprise when the game was over and a loud speaker announcement told us that Tamworth had won 2-0! They had scored straight from the second-half kick off, unknown to Dave or myself. We would have to watch out for that next time.

Next time was yesterday evening.

The game against Sheffield United boosted the crowd eight-fold to 1,103. The Blades included a number of experienced players including Ugo Ehiogu and Lee Hendrie who both starred with Aston Villa. Whilst Nick Montgomery has 250 games with the Blades under his belt, David Carney is an Australian International and the impressive Sun Jihai has been capped 66 times for China and used to play for Manchester City.

So our team did not see much of the ball and it took heroics from our first-half goalkeeper Hernandez to keep the score down to 1-0 at half-time.

It was my turn to get the drinks in, so with a large crowd in the ground I left 5 minutes before half-time. As I closed the gate to the ground behind me I heard someone shout "Go on, beat Harry Barnes to the bar". But no-one did.

I was with Martin as well as Dave on this occasion. But you can guess what happened, when we quickly made it back to the ground we were told that the Blades had scored a second goal. At least we knew the proper score this time.

In the end the professionalism, experience and skill of the Blades told and they triumphed 4-0. But never mind, it was a fine evening in more ways than one, and five of us ended up sitting outside the Coach and Horses putting the world right - which in particular included a discussion about Kenya and Zimbabwe. What more could you ask for - except the influence to help overcome their problems?
Posted by Harry Barnes at 6:45 PM