Violent Deaths In Iraq Since The Invasion 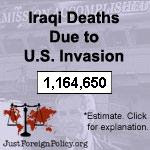 Whatever our attitude is towards the presence of Coalition and Private Military Forces in Iraq, everyone needs to accept that the violent death toll it has (and still is) experiencing since the invasion has been (and continues) to be horrendous.

At last, however, we have a feasible survey giving us an indication of the numbers involved between March 2003 to June 2006.

For this period Iraq Body Count came up with a figure of 47,668. Although it has always shown that its figures are only from firmly verifiable cases and have, therefore, always been a minimum figure. We were then given the figure of 601,027 violent deaths for this period from a highly problematic survey in the Lancet.

The Lancet figure is extrapolated via death count meters (such as the one above) which appears on the blogs of many who are committed to an immediate "Troops Out" stance. The meters claim that their figure shows the latest death count.

Now, however, what seems to me to be the most feasible estimate of the numbers of violent deaths over the period of the Lancet's survey has just been published. "The Iraq Family Health Survey Study" groups has come up with a figure of 151,000. It is well worth reading this.

Their figure is three times larger that of Iraq Body Count and four times smaller than the Lancet's wild guess. So the figure on the meter at the top of this post needs to be divided at least by 4 - with the possibility that the rate of violent deaths (which are still terrible) may recently have declined.

But in my mind, I will in future divide the death count meter figures by four. That still gives a figure that should lead us all to give our hearts and minds towards what we can do to further the future well-being of the Iraqi people. We are in a better position to do this when we know just what the above terrible facts are.
Posted by Harry Barnes at 12:13 PM

Thanks HB. The article and its methodology needs to be studied closely.

Lets hope and pray that violence in Iraq declines.

Hello Mr. Barnes, I agree that dividing the "death count meter figures by four" is a wise decision. I just wonder how the Lancet's numbers could be so huge. Could it have been error(s) in their methodology? Did many respondents lie? It would be interesting to find out. And how has the number grown from 600,000 to 1,000,000??

Iraqi Mojo: Gilbert Burnham (et al) who produced the survey for the Lancet, initially produced an estimate covering an earlier period from March 2003 to September 2004. The figures for deaths which they calculated, ranged from 8,000 to 194,000 and they did no more than go for a roughly mid-level quess of 98,000. At the close I give the link to the Lancet article which took their estimates up to a survey which they conducted between May and July 2006. As with their earlier survey, the later figures they came up with went beyond violent deaths and had assumptions written in to it about deaths arising from the invasion due to health and other factors. They have been criticised by numbers of their peers and have refused to provide access to their survey reports for analysis - claiming that some of the data was never preserved! Amongst a wide range of arguments criticising their work are claims that they interviewed too few people in Iraq and took details from just about anyone who was available, with doubts being thrown on whether the sources they claim to have used would have been so knowledgable and forthcoming. Many are amazed that the Lancet gave it a stamp of approval which the "troops out" movement could use as a form of propoganda. The issue is, of course, serious enough without the numbers being increased several-fold. To a lay person such as myself, the Lancet survey has the look of academic respectability. It is only fellow reseachers that can show us the problems involved. -
http://www.thelancet.com/webfiles/images/journals/lancet/s0140673606694919.pdf

To look into the reasoning used to extrapolate the figure from 655,000 to well over 1 million you can turn to a blog which runs such a meter and click into it - such as that ran by Craig Murray. You will see that what is being done is to build nonsense on top of a dubious survey.

Thanks for the excellent analysis, Mr. Barnes.

Iraqi Mojo: its "Harry". All the best.

We shouldn't forget the 4 million displaced Iraqis, 2 million to Syria/Jordan + 2 million internally, noted by The Iraq Commission when evaluating the situation.

I'm not qualified to evaluate methodologies, but didn't the MoD's Chief Scientific Adviser say about the Lancet study: "The study design is robust and employs methods that are regarded as close to "best practice" in this area, given the difficulties of data collection and verification in the present circumstances in Iraq." ... "However, the survey methodology used here cannot be rubbished, it is a tried and tested way of measuring mortality in conflict zones."

We'll have to wait I think for academic expert views on this new study, before we can come to a balanced conclusion, warranting a divide by 4 approach.

rwendland; I fully accept the massive range of terrible conditions which have hit the Iraqi people since the invasion. These have been (and still are) far worse than I had myself feared at the time I voted and campaigned against the invasion taking place.

But the reasons for doubting the study in the Lancet (alongside some counter-considerations) appear here - http://news.nationaljournal.com/articles/databomb/index.htm

Unlike the people who run those meters which I complain about, I am always prepared to alter my stance on the data depending upon what I see as the weight of serious and established evidence at any time. The shortcomings of the methodology used to construct the meters should be clear to anyone clicking in to the explanation they offer.

Harry, I read the National Journal aeticle. It is certainly a considered critique. Since many of the doubts over Lancet II are to do with the quality of the field work, I don't understand why no-one has commissioned a independant repeat of the methodology as the original only cost $46,000. This issue came out of the U.S. refusal to attempt to keep casualty records for Iraqis in the first instance, and even $100k would be peanuts compared to military costs.

I wonder what the effect of the 4 million migration, a sixth of Iraq's population, has on such surveys. As people in safe areas probably don't migrate, I suspect the migration tends toward under-counting casualties, though perhaps not as the really poor, most at risk, cannot migrate.

i would suggest that anyone interested in estimates of the death toll in Iraq give this long examination a very close read: