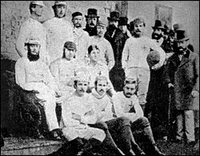 The photo opposite is claimed to depict Sheffield FC shortly after their formation as the first Football Club in the world in 1857. Doubt was thrown on this claim in an article by Denis Clareborough in the current issue of the "Dronfield Miscellany". Sheffield FC's ground being now situated in Dronfield - a short distance from my home.

The Take From Denis

Denis placed this comment under a copy of the above photo -

A photograph reportedly of a Sheffield Club team in 1857. This is almost certainly incorrect as Sheffield Club players were identified in their first few seasons by wearing either red or blue caps and it was some years later before a sophisticated style of kit with badges appeared. The badge, incidentally, may be that of the (London) FA and I have seen a report that this photograph included Lord Kinnaird, a famous footballer and a leading member of the FA who wasn't born until 1847.

Raising The Issue With Brendan

The photo was used by Brendan Murphy on the cover of his book "From Sheffield With Love". The book includes the following acknowledgement - "Cover photograph of Sheffield FC, believed to have been taken in 1857, courtesy of The Club." Sheffield FC being known as "The Club".

Drawing from the article by Denis, I questioned the status of the photo in an item I placed on this blog on 7 January. I also e-mailed Brendan, providing him with a link to the item I had posted.

To his great credit, Brendan then looked into the matter seriously. From his research, he came up with the conclusion that the photo is NOT what he believed it to be. He informs me that in association with his publishers "(w)e will also have to change the cover of future editions", in order to replace the photo.

My Interpretation Of Brendan's Research

Brendan has given me permission to publish his response on this blog. This appears at the close. First of all, I make seven points which are my understandings of Brendan's findings as drawn from both his e-mail and his book.

(1) When Sheffield FC were asked for photos to use in illustrating Brendan's book about their Club, the photo in question was the one they supplied. Although Brendan was surprised that a photo from 1857 existed, he assumed the Club was correct.

(2) Denis in his Dronfield Miscellany article referred to the possibility that a Lord Kinnaird appears in the photo. Brendan's book contains a full-page photo of Kinnaird and provides details of his distinguished career in football (see pages 93 to 95). Also of relevance, he states that Kinnaird was born on 16 December, 1847. Kinnaird came to grow a fine red beard and Brendan now recognises him as being the player in the photo who is seated on the end seat on the left in the middle row. This itself rules out the photo having been taken in 1857, when Kinnaird was still a child. Furthermore Kinnaird never played for Sheffield FC. But in a wide ranging career in the London area, he did play a number of games for combined London teams against their Sheffield equivalents. This initially included a game at Battersea Park in March 1866 when Kinnaird was only 18.

(3) Furthermore, Brendan's book also carries a full page photo of Charles William Alcock (1842-1907), who was the Secretary of the Football Association and was the man who first proposed that this body should set up a challenge Cup, which was established as the FA Cup. Two chapters of Brendan's book are centred on Alcock's career. Brendan now recognises Alcock as being the player in the middle of the three people in the front row of the photo. Along with Kinnaird, Alcock was also in the London team at the above Battersea Park game in 1866. The players turning out in that game (for both London and Sheffield) are listed in Brendan's book on page 66.

(4) Brendan does not, however, believe that the photo was taken as early as 1866. For as stated above, Kinnaird was only 18 at the time and he looks older on the photo.

(5) In 1871 well before Sheffield United was founded, Alcock took an unofficial London team to play a combined Sheffield team at Bramall Lane (which was mainly in use as a cricket ground). JC Shaw a co-founder of the Sheffield-based Hallam FC and later President of the Sheffield FA, turned out in goal for the London team as they were a man short. Brendan does not recognise JC Shaw in the photo, so this also seems to rule out the photo arising from the 1871 game.

(6) On pages 99 and 100 of his book, Brendan shows that Alcock played his only official international game for England against Scotland in 1875, in a 2-2 draw at the Oval and that he soon retired from playing football later that year. Brendan judges that the photo was, therefore, taken between 1872 and no later than 1875, and that it is of team of London based players. Such a team visited Sheffield for games from 1872/3. At some stage the London team came to adopt a white strip and probably used the emblem shown in the photograph.

(7) Brendan seems to have established the parameters for the photo. Only further research can clarify the matter. It is not, however, feasible to argue that it is an early photo of Sheffield FC.

Delighted to get your mail and so glad you enjoyed the book. I assume that although you are a Macca you are now living in Sheffield? Thanks for that link.

That they are not in red or blue does not necessarily mean it is not them as this rule was established in the rules of 1858 (article 11)* but the emblem on some of the shirts is NOT suggestive of Sheffield FC. I have done some homework today and Denis Clareborough appears to be right in his assertion that it is not Sheffield FC. My book contains a photo of Lord Kinnaird and without doubt I now see that this is the man on the left of the middle row (compare the two). Not only that but the book also contains a photo of Alcock - compare this with the man seated centre bottom - it is Alcock! Denis suggests it is the London FA but they did not form till the 1880's and Alcock stopped playing in 1875. It is more likely to be the generic London side that played matches prior to the London FA's formation. They visited Sheffield from 1872/3 onwards though Alcock had taken a team of London-based players up in 1871 (see page 69 'From Sheffield With Love'). As early as 1866 Sheffield had played London in London and both Alcock and Kinnaird had played so the photo could have been taken by representatives of Sheffield FC and taken back with them. This would have made Kinnaird 18 and he appears older than this in the photo. It is more likely that the photo was taken in Sheffield so the earliest it could have been is 1871, in which case it was Alcock's assembled team of London-based players and not an official London side. JC Shaw of Sheffield played for London that day but I cannot identify with any certainty out of the 11 players in white (assuming he was lent a kit). If it is later then it is of the official London side (but predating the London FA) but no later than 1875 when Alcock stopped playing, age 32. I do not know what strip Alcock's unofficial team wore (and I do not know if Kinnaird was in the side); the London strip was all white but I do not know when they adopted this strip. My hunch is that it is the London side some time between 1872-75. There is an outside chance that it is the Wanderers who also known to have played in white shirts in addition to their usual violet and orange numbers and fielded Alcock and Kinnaird but I think this is unlikely as I think London did play with the emblem shown. I am happy for you to publish this on your blog and I will let the editor know by c.c. We will also have to change the cover for future editions.

Kind regards and well done on the detective work,

Sheffield FC have made two further uses of the photo recently. One is in a publications entitled "The People That Make Sheffield FC What It Is Today" which is published at £5. The photo appears at the top of page 2 in a section entitled "A Brief History". The other is here.
Posted by Harry Barnes at 8:12 PM

Hi Harry, I think I have identified the photo as the London team that faced Sheffield in March 1873. See my own blog posting: www.lordkinnaird.com/arthurs-beard-blog.html