What Is The Status Of This Photo? 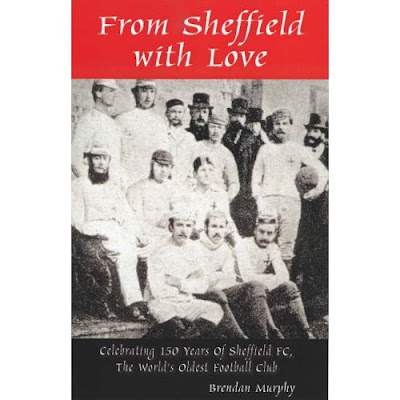 This is the cover of Brendan Murphy's book "From Sheffield With Love" which deals with the formation of Sheffield FC who are the world's first football team. More details about the book are available here from the publishers.

The photo on the cover is reproduced by courtesy of Sheffield FC and is "believed to have been taken in 1857". It is a photo which is used widely by the Club itself.

Doubt about the status of the photo is, however, given in an article by Denis Clarebrough in the current edition of "Dronfield Miscellany"(see "publications") - in which I have an article on a separate topic. Denis is himself a football historian and is preparing his sixth book on Sheffield United.

Sheffield FC have also historically been known as the Club or Sheffield Club. Denis makes this following comment under a copy of the photo -

A photograph reportedly of a Sheffield Club team in 1857. This is almost certainly incorrect as Sheffield Club players were identified in their first few seasons by wearing either red or blue caps and it was some years later before a sophisticated style of kit with badges appeared. The badge, incidentally, may be that of the (London) FA and I have seen a report that this photograph included Lord Kinnaird, a famous footballer and a leading member of the FA who wasn't born until 1847.

Brendan Murphy has previously publicised his book on this blog - here. Whilst I will be attending a meeting to be addressed by Denis Clarebrough on "Sport in Dronfield" on 24th April. Sheffield FC's modern stadium is in Dronfield.

I will seek to raise with Denis the issue of the status of the photograph. In the meantime, Brendan and others might like to comment on this matter. I will also raise this question with the Club.
Posted by Harry Barnes at 10:15 PM