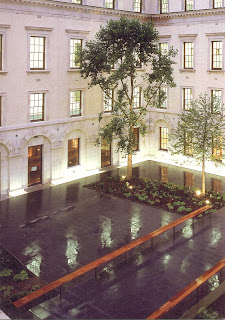 This is a Xmas Card which Gordon Brown sent out in 2002 when he was Chancellor of the Exchequer. Unfortunately, it isn't his only creation which is lacking in imagination. I comment below on his latest interview in today's Observer.

When Brown Goes To Town

Today's Observer runs an interview with Gordon Brown as if it was his Mission Statement for 2008 - see here and here. The topics which he discusses are, however, dictated by the questions he is asked. So perhaps what is missing from Brown's responses are not entirely his own fault.

Although I imagine that some preparatory discussions between 10 Downing Street and the editorial team on the Observer would have taken place to clear the ground for what was to be discussed. I assume this explains why we get no embarrassing questions about missing personal hospital, benefit and driving records. Nor about cash for favours. It is also clear that if a Prime Minister has something else to tell us, he can easily find a way to do this in the context of a press interview.

I grant that Britain faces a number of immediate problems which Gordon was required to address. These arise from matters such as serious economic buffeting, terrorist dangers, significant sections of the workforce remaining unskilled and record levels of personal debt. So we could expect Prime Ministerial gravitas on the need of tackling such problems. He is, however, thinner on solutions than he is on our need to gird our loins.

Gordon needs to understand that his core labour voters can not live on fresh nuclear power stations, private house building programmes and ID cards alone. We need something to inspire us and to work and vote for. With a few relevant policy proposals to fit into the picture, there is plenty of mileage to be gained from using some old fashioned socialist rhetoric about fairness, social equality, co-operation, justice for the world's deprived and saving the planet. He doesn't even have to mention what he sees as the politically embarrassing "S" word when arguing for such values. Indeed he does dip his toes into the water with a mention of having met the Kyoto targets and the need to look for more radical targets for 2050. But words on these read like a footnote rather than a chapter heading.

Overall there is little to indicate that he has a vision which relates in any way to his Party's traditions. He merely wishes to be seen as a more relevant technocrat than his Tory and Lib-Dem opponents (which he might be, but that is all).

1. He wants "financial management and financial budgeting" to be taught in schools. What is needed instead are educational provisions (open for life) which stimulate our intellectual imaginations and widen our horizons. That will give us the wit to know how to run our bank and mortgage accounts. And it will have many more spin offs, including the advancement of intelligent and caring forms of democratic participation.

2. His commitment to ID Cards is also only half-thought out. We can use ID cards for clearly progressive purposes, such as ensuring that everyone who is entitled to benefits receives them and in ending the scandal of 2 million of those who are entitled to vote being missed off relevant electoral registers. But we can't do that under a half-cocked scheme in which "existing British citizens" can opt out of holding ID cards. The case for ID cards should rest on socially valuable ideas being operated on universal criteria. It seems that we will be getting neither from Gordon.

3. When it comes to the need to make long term commitments, Gordon gives us nuclear power, an expanded Heathrow and a housing programme from which Councils are mainly excluded. It is a programme to drain one's blood rather than send it pounding. Gordon's proposals call for other matters to be placed on the agenda. How are nuclear power stations to be made secure and subject to democratic control in their operations? Will we tackle the problem of the need to ration people's aeroplane and other forms of travel? Why can't we have an option to enable democratically elected Council's to be landlords?

4. If we are to attract people away from the forms of Islamic extremism revealed in Ed Husain's "The Islamist" by winning the hearts and minds of the people concerned, then might not the most fruitful and least discriminatory way of doing this be to try and capture ALL our minds for the principles of sharing, participation, mutual support, anti-discrimination, democratic involvement and co-operation. There you are Gordon; all that can be said without once using the "S" word.
Posted by Harry Barnes at 6:07 PM