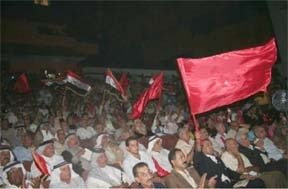 As explained here by "Labour Friends of Iraq", the Iraqi Communist Party have played a major role in the country's recent public celebrations (e.g. opposite) of the 50th Anniversary of the 1958 Iraqi Revolution which led to a 5 year period of both social improvement and high hopes for the future. Unfortunately, in 1963 the first coup involving the Ba'thists took place, setting seeds which led on to the eventual excesses of Saddam Hussein.

The first half of my own 4 part series on the History of the Iraqi Communist Party shows why they see the 1958 to 1963 period as being of such significance. See here for Part 1 and Part 2.
Posted by Harry Barnes at 11:17 AM

My parents attended a gathering of intellectuals to celebrate Abdul Karim Qassim the other night in London. My mother says he was the best ruler of Iraq in her lifetime. She says King Faisal (the father) was a close 2nd to Qassim. I have heard from a few Iraqis that Qassim tried to prevent the slaughter of the royal family in 1958.

Muhannad: Qassim's period of leadership from 1958 to 1963 was one of great hopes for Iraq - even if it wasn't faultless. Important social reforms took place, ideas were being more freely expressed, sectarian divisions were absent and many had hopes that democratic institutions would emerge. This was all reflected in the May Day Rally in Baghdad in 1959 when half a million people from all over Iraq came together out of a population of less than 7 million. It will also be worth celebrating next May.