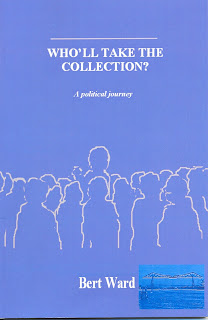 Yesterday I reviewed Jonathan Rose's book "The Intellectual Life of the British Working Classes". Anyone interested in that telling topic will find the book shown opposite to be a sheer delight. It is from someone who emerges solidly from the tradition which Rose describes.

Bert Ward, the author is 85. He left school at 15 and for the following two decades he undertook a variety of solid working class occupations; first in the Navy, then at a building site, a foundry, the steelworks, a shipyard, on the railways and as a scaffolder. He also found time to train as a student nurse. During this time he became an active trade unionist and a dedicated rank and file worker for the Communist Party.

Building On His Base

Bert's consuming interests led him into full-time adult education as a student at Ruskin College and then on the London School of Economics (LSE). He retained and polished his wider political commitments. He always did this in a questioning way and his book shows that he was as fascinated with the ideas of Hobbes, Rousseau and Michels as with those of Marx.

I studied at Ruskin just two years after Bert moved on. It was then a College essentially for people from working class backgrounds who held few or no formal educational qualifications. Today's pattern has altered as further education is now solidly into forms of training people within modules for accreditation, so they can move to higher stages. This pattern rubs up against the norms of education which Bert experienced and then pursued as a Lecturer. He also drew lessons from his Ruskin experience on the importance of questioning, discussion and debate when involved in the practice of politics.

Bert went to Ruskin on a trade union scholarship and before he moved on to the LSE he had a spell working for the Amalgamated Engineering Union. After his final studies, he became a lecturer for a further two decades in Politics at the South East London College, before retiring and settling in his native Middlesborough.

I first met Bert in 1990 when he was retired and was finding even more time for political activity. The Communist Party he had devoted himself to (but at least after Ruskin, never uncritically) was nearing its final collapse.

We were both involved in the establishment of the British Section of a group called "New Consensus" which I described in my Constituency Labour Party Report at the time as being "a broad-based group which aims to challenge ambivalence and apathy about the right to life in Northern Ireland.....(it) condemns violence from wherever it comes from and campaigns for devolved government, a Bill of Rights and integrated education as a means to undermine sectarianism and terror..".

This was certainly not the hard-left politics of being soft on Sinn Fein. I would describe Bert's approach as neither being orange nor green, but red. For instance he sought avenues for working class unity in Northern Ireland in order to undermine the sectarian divide. He describes well how he moved away from the common hard-left stance whilst active on Irish issues in the Communist Party in the 1980s.

His work with our group, who later became known as "New Dialogue" was unstinting, effective and intellectually uplifting; particularly in his editorship of our influential bulletin with its column "Ward's Words".

When I first met Bert he was roughly the age I was when I stood down from Parliament. He illustrates that when you arrive in the region of "three score years and ten" that you can devote yourself more fully to your concerns. Bert's interests also being kept alive by his love of writing poetry.

So he provides me with two New Year Resolutions. One is to return more fully to the political game, whilst ignoring the temptations of politicking for positions. The second is to start writing my own book of essays on my own political journey - to date.

As Manny Shinwell showed when he wrote "Lead With The Left: My First Ninety Six Years" (London Cassell, 1981), Bert also has time to write a sequel. I hope so anyway.

And to you also, Anand. See here, it applies to the New Year as well as Xmas -
http://threescoreyearsandten.blogspot.com/2007/12/merry-xmas-on-xmas-day.html