Why The Economy Has Gone Wonga 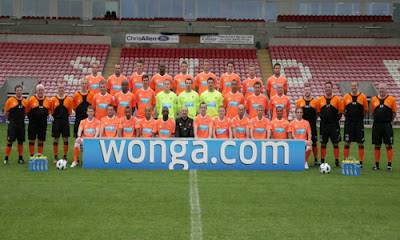 Yesterday's 'Independent' reported that Adrian Beecroft, the author of the report proposing the scrapping of unfair dismissal legislation "chairs Dawn Capital, whose portfolio includes Wonga.com which offers short term loans to tide people over until their next pay cheque. A recent probe by the consumer watchdog 'Which?' found it quoted £36.72 interest on a 30 day loan of £100 - equivalent to a 4,394 per cent annual interest rate."

You couldn't make it up - could you?

Wonga.com sponsored the above Blackpool team in last year's Premiership. Which is a pity as there was much to admire about the Blackpool team's season. I saw them play three times.

Sadly the Wonga type of loans have been going under New Labour, I wrote to my MP about it,she replied she would look into it, get back to me, but then again that's a standard letter meaning I've no interest.

These firms like the new health lottery are nothing but people making money for money sake something New labour and the Tories love.

I will try to check to see who (if anyone) is acting to seek to stop this serious form of exploitation.

The following motion was discussed on 3rd February in the Commons - as moved by Stella Creasy (Walthamstow) (Lab/Co-op):

"That this House notes with alarm recent evidence showing a fourfold increase in the use of payday lending since the beginning of the recession and that high cost credit lenders advanced approximately £7.5 billion to low and middle income consumers in 2008 alone; recognises the problems of financial exclusion, lack of financial and debt management education, lack of price competitiveness in the unsecured lending market and the near monopoly positions of many large lenders which contribute to the high costs of borrowing; considers that without action these factors could worsen family debt, poverty and financial difficulties to the detriment of the economic recovery; therefore calls upon the Government to introduce, alongside measures to increase access to affordable credit, regulatory powers that put in place a range of caps on prices in areas of the market in unsecured lending which are non price-competitive, likely to cause detriment to consumers or where there is evidence of irresponsible practice; and believes that such caps should take account of the desirability of maintaining access to affordable and responsible credit, the likely impact on the supply of credit and the cost of enforcement, that they should be regularly reviewed and that they should use the total cost of credit, calculated on a yearly basis, to ensure that lender avoidance and distortions in price are prevented."

It was kicked into the long grass when a wrecking amendment was carried by 271-156 votes. But Creasy and others did argue their corner and voted against the amendment.