A Death Of Party Democracy 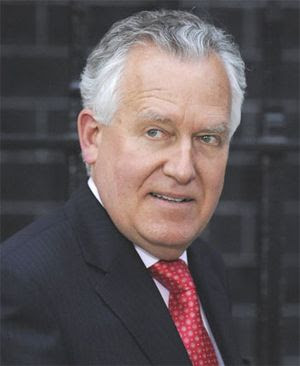 Peter Hain, Chair of Labour's National Policy Forum and Guru of "Refounding Labour". Architect of this death of Labour Party Democracy. At one time he claimed he was a "libertarian socialist", but is now neither. And to think that some 5 years ago, I argued that he should stand for the leadership of the Labour Party. Well even at my age, you can live and learn.

Mass Changes Made To The Rules Of The Labour Party.

I was not present at the Labour Party Conference, but it seems to have carried out a mass of changes to its rules on the basis of only one card vote which was carried with a Yes vote of 93.9% (88.3% of CLPs and 99.5% of affiliates). Given the wide ranging complexity of the changes concerned (even though many were mundane), these are percentage votes which are normally associated with totalitarian or whipped structures.

My understanding is that the amendments were made on the back of a last minute report entitled “Refounding Labour to win – a party for the new generation”. This was a 39 page report which appeared in a pack containing a total of some 100 pages which delegates were only first able to collect on the opening day of Conference, when the rule changes were themselves about to be voted upon.

A further key 100 page book entitled “Labour Party rule book – including Refounding Labour amendments” was also made available on the day and in the run up to the vote. Between a fifth and a quarter of what are now the old rules of the Labour Party appeared in red with lines through them. It was being proposed that these should be replaced by lengthy sections which appeared in purple. Perhaps the colouring had an ideological significance. I doubt whether many delegates had the opportunity to digest the relevant documents which had just been made available to them. As they covered some 200 pages, how could anyone engage in an assessment of what was being proposed when they needed also to be in the Conference itself to keep an eye on developments?

Ignoring what seem to me to be minor and repeat changes, I give below a bare-bones summary of the main changes in this new rule book. I have truncated these into 22 items and may well have missed matters of importance – yet unlike delegates needing to vote, I have spent a few days looking at the key documents. At the close of my summary, I also add a three point NEC Statement which was issued to clarify or adjust what was put to the delegates.

It should be noted that (1) although many changes were given justification on the grounds that they arose from a consultation procedure within the Party about “Refounding Labour”, many of the proposals had never appeared in the earlier consultative documents relating to this process and the ordinary membership of the Labour Party had had no means of knowing they were on the cards, (2) as a matter of natural justice and internal party democracy, all the proposed rule changes should have been circulated well in advance of Conference to CLPs and affiliated bodies to enable them to mandate their Conference delegates, and (3) the matters placed before Conference were so huge that they should have been put off to a special Conference; this could also have allowed amendments to the rules changes to have been considered.

It should also be noted that we are not at the end of the above “Refounding Labour” procedure. The NEC Statement given at the close of my summary, states that these consultations will now continue until March 2012. We need to push for democratic procedures this time round; including the clearing up of what happened at this Conference. For a start, we need to know exactly what ideas were submitted to the supposed consultation by the much maligned rank and file. For the style of the claims in “Refounding Labour to win” are merely that earlier consultations had given “widespread support” to x, “throughout the submissions” y was clear and “an extensive number of the submissions highlighted” z. Yet none of the x,y and z's came out of any of the six consultative, Party and Labour Discussion Group meetings I attended. So excuse my scepticism. It would be appropriate for us to be provided with hard evidence of what came out of such meetings.

I will not pass judgement at this stage on the nature of the changes which are summarized below. But I do contest their democratic legitimacy. My case is that non-democratic procedures were followed and the rights of the membership were violated.

Addition 21 October : Ann Black of the NEC states " Policy-making seems to have moved not only beyond the NEC but beyond the national policy forum and conference." See the rest of her revealing report here.

p 1. OBJECTIVES - “the party will bring together members and supporters”.

p 2. FINANCIAL SCHEME – this spells out accountancy arrangements for CLPs and others.(See also pp 99-100 below).

p 10. MEMBERSHIP SUBSCRIPTIONS – includes reduced rates for new members from affiliated Trade Unions and a minimum allocation to CLPs of £1.50 per member.

p 12. CONFERENCE DELEGATES – 6 added from the Association of Councillors (ALC) and 2 from Young Labour (YL).

p 14. CONTEMPORARY MOTIONS TO CONFERENCE – can now be up to 250 words. Nominating and voting rights are spelt out.

p 17. LEADER OF THE SCOTTISH LABOUR PARTY – gives the procedure for his or her election.


p 18. PROCEDURE FOR FILLING NEC VACANCIES – this relates to posts which are appointed by Conference on a two yearly basis.

p 19. NATIONAL POLICY FORUM – additions to its membership.(These changes are minor, yet the “Refounding Labour to win” document devotes four pages to the NPF. It is supportive of its role, whilst wishing to develop it. This gives a hint of the shape of things to come.)

pp 21-22. RIGHTS AND RESPONSIBILITIES OF ELECTED MEMBERS – a new clause II relates to all elected representatives. The NEC can introduce candidates contracts and there will be a 2% levy on their salaries and on set personal allowances, including all payments resulting from elected office and on salaried positions in the Lords.

p 26. DISCIPLINARY RULES FOR CLPs – relates to those who operate in a CLP which has no Executive Committee.


pp 29-35 and pp 97-98. CHANGES TO THE RULES OF CLPs – These are wide-ranging and allow CLPs to “adopt any method of organisation currently approved by the NEC” whether delegate structures or all member meetings. The changes available include establishment of workplace branches and forums for interest groups. Whilst "The annual meeting should no normally be held before May in any year" and a “team of officers and coordinators, together with the parliamentary candidate and/or member of Parliament and the campaign co-ordinator, shall provide a strategic lead to the development of the Party in the constituency” (p 33).

p 36. ARRANGEMENTS WHERE CONSTITUENCY AND DISTRICT/COUNTY BOUNDARIES ARE COTERMINOUS – these are deleted. (Some of us were looking forward to the convenience of joint CLP and District Meetings in NE Derbyshire which has arisen under the Boundary Commission's proposals, but now these are ruled out.)

p 37. RULES FOR BRANCHES – This includes “to provide an opportunity for members to participate in the activities of the Labour Party within its area with the approval of the Executive Committee of the CLP and in line with the development action plan; to play their part in the Party's policy-making processes; to work together to run effective election and issue-based campaigns; to maximise the Party's engagement with organisations and individuals in the branch area and join with them in working for social justice. Work to meet these objectives shall always have high priority in the branches plans and meetings.”


p 45-46. YOUNG LABOUR - given Regional Representation and additions to its National Committee.

p 47-50. LOCAL GOVERNMENT COMMITTEES – are replaced by “Local Campaign Forums” with the NEC given the role of providing guidance on model structures. The membership of the LCF shall be focused around campaign delivery, the recruitment and selection of candidates and the development of opportunities for wider engagement with council issues.”

p 60. MODEL STANDING ORDERS FOR PARTY UNITS – in certain circumstances people resident in an area but who are not on the electoral register can be delegates. Plans for campaigning on local issues and strengthening links with members, affiliates, supporters and communal groups will be central to all business.

p 83- 89. PROCEDURES FOR THE SELECTION OF LOCAL GOVERNMENT CANDIDATES - “The timetable should be set so that, as far as possible, candidates are selected six months in advance of the election (12 months where the council elects on a two or four yearly cycle)” An LCF may apply to the NEC to pilot new or innovative procedures.”

pp 99-100. MINIMUM GUARANTEE OF SUPPORT TO CLPs - “Every CLP will receive a cash payment based on the number of paid up members in that CLP....A minimum payment to every CLP and no national deductions.”


It is our aspiration to extend the reach of our party by registering people who are Labour supporters as the first step towards turning them into full members. As a sign of our willingness to embrace a wider span of Labour supporters, we will create a new section for Registered Supporters within the Electoral College for electing the leader of the party. In so doing we are clear that the existing sections of the College should retain the primary shares of the College. Hence three key principles will underpin NEC procedural guidelines regarding the leadership election:


1. The Registered Supporters section of the Electoral College shall only come into being when there are more than 50,000 supporters registered with the party;

2. The supporters section shall, subject to point 3, constitute between 3% and 10% of the Electoral College, and shall never constitute more than 10%;

3. A member's vote shall always be worth more than a registered supporter's vote.

So the Electoral College for future leadership elections shall be comprised of:

Clear expressions of concern have been made about the ability of party members to cast multiple votes; particularly in respect of MPs and MEPs who already have the ability to nominate candidates in addition to having their own section in the Electoral College. Other multiple votes exist within the affiliate section and submissions voiced support for the universal application of "one member one vote" in this section. It is therefore proposed that MPs and MEPs should be restricted to just one vote in their own section and not permitted to cast any ballots in any other sections. It is also proposed that affiliated members shall cast no more than one vote in the affiliates section.

Discussions during this consultation have focussed on the need to make a reformed policy making system more accessible and responsive to Party members, with a fresh empowered annual Conference with even greater democracy. We are determined to take a new approach to policy making which meets those objectives and will take more time to develop the details. The NEC therefore agrees to further consult between now and the end of March 2012 on how to make the policy and decision making processes more dynamic, open, and democratic with a view to taking forward proposals to the NEC next spring, ahead of Conference.

Note also, Harry, that the mass change means that no further constitutional amendments can be made to the rule book under the three year rule. This takes us through the the next GE & the boundary changes.

On your Labour History interests, see http://threescoreyearsandten.blogspot.com/2006/12/100-not-out-labour-in-north-east.html and
http://threescoreyearsandten.blogspot.com/2011/10/birth-of-easington-colliery.html
In January I am due to address the Notts and Derbyshire Labour History Society on "The Parliamentary Pitmen Politicians of North Derbyshire". I suspect that history is all that remains.