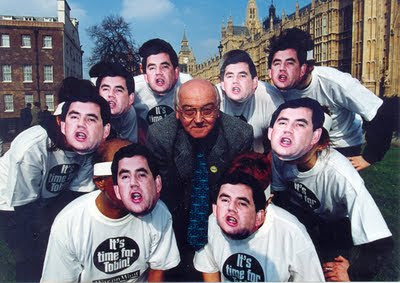 The following quotation is taken from an important item published today by Simon Chouffort on "Left Foot Forward". He advocates the use of the Robin Hood Tax as a means of tackling the current international financial crisis. The Robin Hood Tax is a variant of the Tobin Tax, which I spent a lot of time advocating at one time in parliament, as indicated in the above photo taken when Gordon Brown was at the Treasury. Here is one example. (See also the label in the bottom left hand corner).

"One policy option being discussed in Europe is the idea of a Financial Transaction Tax, known popularly in many countries as a ‘Robin Hood Tax’. A tiny tax would be levied on each stock, bond, derivative or currency transaction. It would target financial institutions’ ‘casino’ style trading that helped precipitate the economic crisis and is capable of raising hundreds of billions of euros a year. It could help support those who have been hardest hit by the financial crisis both in Europe and around the world.

France, Germany, Spain, Portugal and Belgium are among the countries to publicly support it. Both the European Parliament and Commission are actively seeking its implementation. Nicolas Sarkozy has made it one of his priority issues for France’s Presidency of the G20. It’s increasingly viewed as the most robust and simple way to ensure that the financial (sector?) pays a fair contribution for its part in the economic crisis. Over 40 have already been implemented around the world and concerns about the feasibility have been shown by the IMF, European Commission and others to be overblown.

As Europe moves ahead and grapples once again with the might of the financial sector, the UK Government should deliver on its claim that ‘we are all in this together’, support their efforts and prove that it is capable of bringing the financial sector back under control."


Warning: US Economy Is About To Collapse Says…

US dollar is going down and there is no way you can stop it.

Worst of all? This news has been confirmed by Goldman Sachs and the World Bank also.

That’s why you need to watch astonishing documentary by American Financial Council.

Watch this video before the ruling elite makes it inaccessible.

The video contains various controversial facts that mainstream media is trying its best to hide from you.

Watch The video now: >> The Collapse of US Economy exposed<<