What Now For Adult Education? Lessons from Derbyshire's Miners. 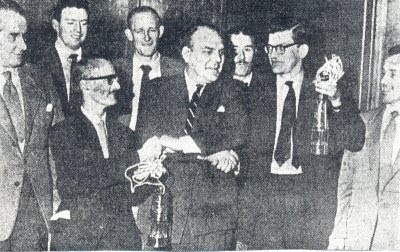 Some of the members of a group of Derbyshire Miners in 1960 who have just completed a three year Day Release Course. They are presenting miners' lamps to their tutors who are the men wearing glasses. On the left is Noel Williams of the Workers Education Association who taught economics and on the right is the politics tutor Royden Harrison from Sheffield University Extramural Department who was a leading Labour Historian and whose final book was to be "The Life and Times of Sidney and Beatrice Webb : 1858 to 1905 the Formative Years". From left to right, the students are Les Ralley who became a leading figure on both his local District and Parish Councils, a 27 year old Eric Varley who four years later was to embark upon his parliamentary career and became a Cabinet Minister, W. Whitaker, E. Lawrence presenting the lamps, E. Bradbury and N. Wade. The nature and significance of such courses is indicated below. A meeting is to be held on May Day in Chesterfield to discuss how far the tradition they were part of can be revitalised in modern circumstances. Details of the meeting appear at the close.


Under Bert Wynn who was Secretary of the Derbyshire Miners, a programme of Day Release Classes was established in 1952. These continued in operation for the next four decades, but finally ended as a consequence of the closure of the local pits. Miners attending studied subjects such as industrial relations, economics and politics.

A new class of 20 miners was established each year. They came to span a three year period and involved a total attendance of 120 days. The tutors on the courses came from the Sheffield University Extramural Department. The Derbyshire Miners having an agreement with the National Coal Board (NCB) to release their members from work to attend the classes.

Those attending required no prior educational qualifications; nor were any exams, tests nor marks ever provided. However, because the supply of places on the courses was always outstripped by the demand, selection conferences were held in the Miners Offices on Saltergate by the tutors where the applicants met together in discussion groups and participated in a note-taking exercise. A Saturday morning class also came to be run for those who it was felt would benefit from a preparatory development of their student skills; many of these miners moved onto the full Day Release Courses and made highly effective use of the abilities they had developed.

The miners on the courses also engaged in private study and produced a steady stream of written work. After their time on the courses, the participants went on to make a variety of uses of their studies. Some becoming more deeply involved in the work of the National Union of Mineworkers, other progressed through the NCB, numbers became involved in the work of the wider labour movement including those who became local councillors, whilst the late Eric Varley and Denis Skinner became local MPs, others moved into full-time studies at Adult Education Colleges and then often went on to obtain degrees at University before taking up posts such as social workers, educationalists and full-time trade union officials. Others remained in their established roles in their communities, taking their newly developed interests with them and also influencing communal developments.

I was lucky to be a tutor on the courses for 21 years from 1966, before becoming a local MP for a further 18 years. I have always claimed that the standard and seriousness of the investigations in the classes was more substantial than was the general run of my experiences in parliament. This is because serious adult education is about making well thought out judgements on complex issues, whilst parliamentary politics is too often about point scoring.

The pattern which was established in Derbyshire was pursued elsewhere. The Extramural Department were involved with similar courses in areas such as the South Yorkshire Coalfield, the Steel Industry, the railways, engineering and with Shop Stewards Courses which drew people together from differing firms.

It was not, however, just because of the decline of large industries mainly concentrated in the public sector, that such courses were ended. Another pattern of adult education (which had always had its own separate existence) took over but was manipulated under Margaret Thatcher. Unfortunately, it became a growing trend that was then pushed under New Labour. What remained of day-release work was often placed under the influence of employers, whose interests were to see their workers being trained to undertake tasks strictly relevant to their employment duties. More emphasis was placed upon adults attending courses in their own time, which would be carefully accredited to meet specific and limited purposes. Certification became the order of the day. The way for adults to progress via education came to be seen as requiring studies to be broken up into specific and limited modules and tested at each stage, so they could act as stepping stones (or some would say stumbling blocks) to higher qualifications. The scope for investigating key issues about life and society were restricted and were seen as secondary. The old form of equality and socialising between tutors and students, in which each learnt from the other, was seen as being unnecessary. Increasingly course fees were expected to cover the bulk of the provision of adult education.

It is not that there should be no room for some forms of today's dominant trend in adult education, but it should never have happened at the expense of the invaluable approach which the Derbyshire Miners had participated in and developed.

Nothing in life is, however, ever too late. Some of us have always attempted to replicate something of what used to be called the liberal education tradition by running and attending a variety of discussion groups. But it is now time to campaign for what was taken away from us. We are not alone in this.

Why not join us at the meeting advertised below? Former participants in the Derbyshire Miners' Day Release Classes will be present. But we know that we can't somehow just try to re-cycle the past. It is a matter for all of us to seek new ways in which what was once achieved in a period from the 1950s can be refashioned to meet the challenging conditions of the 21st Century. We owe many debts to Coal Mining in Derbyshire; serious adult education is one of them.

What Now For Adult Education? Lessons from the Derbyshire Miners.