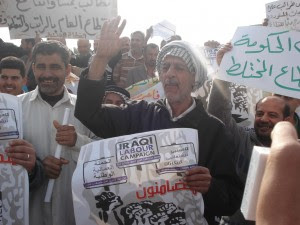 
Whilst I detested Saddam Hussein's Regime, I fully opposed the invasion of Iraq believing that it would produce the type of death, destruction and mayhem which followed. Furthermore, I would still have actively opposed an invasion even if a United Nations' Resolution had been adopted to legitimize it. The argument that Iraq could be invaded because Saddam Hussein held weapons of mass destruction was nonsensical. Either he held no such weapons and the case (as it turned out) was false, or he held such weapons and attacking him would have been like prodding a mad dog with a stick. He would have used such weapons and the result would have been even worse than it was.

This did not mean that I felt that he should just have been left to his own devices. There was the strongest obligation upon the international labour movement to support clandestine forces in Iraq (and their supporters in exile) who were struggling for democracy and for trade union and other rights. Although in today's Iraq such pressures now have more open (but still imperfect) avenues of expression, we still need to provide our full backing for them. Not least because Saddam Hussein's anti-trade union laws still remain in existence.

If the invasion had not taken place and if Saddam Hussein and his sons had somehow held onto state power since then, then just imagine what the impact of the current situation in the Arab World would have been upon Iraq. There have already been demonstration in Iraq as a consequence of the protests across North Africa and the Middle East. These current actions in Iraq would have been deeper and more desperate if they had been directed against a contemporary Saddam Hussein.

What would we have done to come to the aid of democratic forces in Iraq in such circumstances? Would the type of United Nations' Resolution which has just been adopted over Libya (which excludes occupation) have been acceptable to people who thought as I did in 2003? I know that we can't control a conflict situation, nor fully restrain western military might from going over the top, nor stop western governments from having hidden agendas. But the option over Libya is to either sit back and give Gaddafi a free hand, or to back the United Nations and the Arab League. Doing the latter does not have to mean that we can't press against excesses by western powers. But democrats throughout the world have no influence over Gaddafi.

Libya in 2011 is not a repeat of Iraq in 2003. Nor might Iraq in 2011 have faced the same position as the one that was disasterously forced upon it in 2003. Circumstances do alter cases.
Posted by Harry Barnes at 6:02 PM