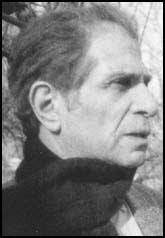 "I believe we need a market economy but not a market society", said David Miliband when launching his Labour Leadership bid in South Shields. But what if market economies produce market societies? We would then need to tackle both at the same time.

He should turn to pages 49 and 50 of his late father's book "Marxism and Politics". It was a book which Ralph Miliband (photo) dedicated to David and Ed, although they were only aged 10 and 6 at the time.

Ralph Miliband quoted Marx and Engels from "The German Ideology" -

Ralph then comments thus - "As will be argued presently, these formulations now need to be amended in certain respects. But there is at least one respect in which the text remains remarkably fresh, and points to one of the dominant features of life in advanced capitalist societies, namely the fact that the largest part of what is produced in the cultural domain in these societies is produced by capitalism; and is also therefore quite naturally intended to help, one way and another, in the defence of capitalism".

Ralph Miliband wrote his final book in 1994 just before his death. It was published with a Foreword by David, Ed and their mother and is entitled "Socialism For A Sceptical Age" . They conclude "Nothing can make up for the loss we feel, but it is some comfort that the ideas developed by Ralph Miliband in this book and elsewhere will live on". The first two chapters of the book are entitled "The Case Against Capitalism" and "Socialist Aspirations". He deals not in dead dogmas but in living truths.

Hopefully David and Ed's competition for the Labour Leadership will stimulate an interest in the works of their father. His classic "Parliamentary Socialism" published in 1961 still provides us with key insights into the way the Labour Party operates. The experiences of the last half-century fit well into the intellectual framework he provided. David and Ed would do well to turn to the family bookshelves and engage with their father's ideas.
Posted by Harry Barnes at 1:55 PM

"David and Ed would do well to turn to the ..." left at Dover and take their discredited communistic ideas back to their sources in Germany and Russia.

We are sick if people who "know better" than us what "we" want.

Socialism For a Sceptical Age is a much underrated and seldom read book. But it is an important one. In particular comrades who think Britain will undergo a 1917-style revolution ought to take a look.

Phil : I like your post "The Left and the Labour Leadership", especially your final paragraph. Now that Dianne Abbott has entered the race, we only need two more to declare their candidature and there is the mathematical possibility than they will all share the nominations equally. It would mean that no-one would reach the 33 threshold.

Alan Douglas : On you profile you claim to contribute to the blog "A Better World". They have an admirable contribution here in support of human rights -
http://towardspeace.blogspot.com/2008/12/gala-concert-for-human-rights-in.html. How do you (and they) square what you say here about the Milibands with such sentiments?