The Future For Socialists 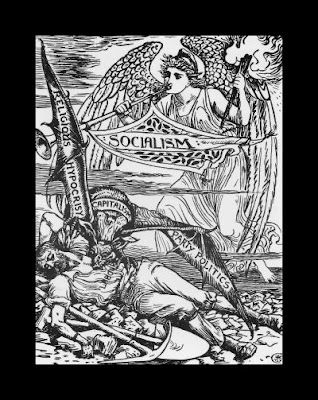 The polls have just closed in the General Election. Perhaps Labour has done better than anticipated. But whatever the result, democratic socialism is in crisis.

There are, of course, many bits and pieces Labour can point to with satisfaction; such as the minimum wage, the school building programme and free bus passes for the over 60s. But under the guise of New Labour, it has alienated much of its traditional support. In striking out for what it called a "dynamic" economy it failed to protect the industrial working class whose employment and communal life had been based around the collapsing manufacturing industry. Instead Finance Capital was backed as the source of growth. But the more this seemed to work in the short term, the bigger was to be the financial collapse.

Democratic Socialism and Labourism were jettisoned within the Labour Party. The Parliamentary Party was filled up with place-persons who had turned to politics as a career move. Those Labour MPs who reflected traditional values were either bought off or isolated mainly within the Socialist Campaign Group.

Rank and file activists found that the internal democratic life of the Labour Party (which had never been perfect) was now anaesthetised. In despair many resigned or failed to renew their membership. Some gave up political aspirations, whilst others buried their energies in minority group politics or in interest group activities. Some of the later being areas with their own forms of impact.

It might be the case that once the election results are announced, New Labour will be on the back foot. Those democratic socialists who remain in the Labour Party might for a while find more avenues in which they can press their case.

But the task ahead is a huge one. Short term coups will not provide long term advances. Democratic Socialism needs to reconstruct its base, both within the Labour Party and in society generally. This will require a concerted effort over years and not "just the big set piece battles but the drip, drip, drip of arguments and constant assertions" (Prof Massey).

We need a big protracted turn, but this is in need of many small beginnings. We need to discuss what these entail. Here are my three starting points - (1) discussion, (2) democratisation and (3) direct activity.

(1) Discussion. Democratic Socialists need to meet together to debate ideas within loose organisational formats, which themselves eschew sectarianism. Within the Labour Party we need to press for the importance of such forms of political discourse; which we should extend to embrace ex-members, non-members and members of outside bodies. Political Education (but not political indoctrination) should be a constant activity.

(2) Democratisation. We need to revitalise the democratic life of the bodies we engage in within the wider Labour Movement. The way to tackle their democratic deficits is continually to behave within the internal life of an organisation as if it was already democratic. Bureaucratic Centralism can be placed on the back foot even when it has fixed the rules in its favour. Injustices will be seen to be injustices whatever the rule book has been fixed to say. Let us all put down meaningful resolutions for debate or submit candidates to challenge those who believe that they rule by divine right. The purpose should not be to win or to fix victories, but to encourage the life blood of the dialectics of debate.

(3) Direct Activity. Debate should, however, lead on to action. We need to press the institutions of the wider Labour Movement into joining with deprived communities to struggle for their immediate needs. But we need to do this for the well being of people who are in need, not for some direct pay off in membership or votes. It is both the right thing to do and part of the long road to rebuilding what should be our natural base.

The above three avenues end up re-enforcing each other. See here also.
Posted by Harry Barnes at 10:00 PM

To which I would add writing, research, adult education (of course) and blogging, because everything that chips away at the malign neo-liberal consensus in political economy is part of a process of reinventing a left that has a genuine commitment to equality and security. So keep it up Harry.

The Plump : I agree that we have to include the types of avenues you add. Old dogs need to learn new tricks in a new era, without forgetting the old tricks. We had 20 people at our Dronfield Labour Party post-election Discussion Meeting on Sunday, only half of them being local branch members.