What Can We Do With Capitalism? 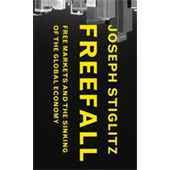 Today's Sunday Telegraph contains this important extract from Joseph Stiglitz's book "Freefall: Free Markets and the Sinking of the Global Economy" (Allen Lane, 2010). The book is due to be published on 28 January. The extract appears under the heading "Why We Have To Change Capitalism".

Stiglitz presents a Keynesian-style case for international and governmental controls, regulations and interventions over the operations of capitalism, especially in relation to its speculative financial activities.

There is a danger that numbers of socialists will reject Stiglitz approach on the grounds that we need to replace capitalism rather than trying to help it survive by reforming its operations. Such a reaction to Stiglitz's proposals would be mistaken.

For those of us who believe that socialism and democracy reinforce each other, the proposals which Stiglitz advocates would help to open up a space in politics where democratic socialist ideas would once more be able to live and breathe. Such an objective should be our priority. Always remember that our own economic crisis of 1931 and the immediate electoral collapse of Labour was eventually followed by the election in 1945 of a Labour Government with a substantial majority who produced a mixed economy with a welfare state and full employment.

For socialists who remain in doubt, please check this out.
Posted by Harry Barnes at 1:05 PM

Hello my name is aiden voss. My grandfather is Len O'donnell and we've been recently taking pleasure in digging up as much info as possible about the history of the pits and the great disaster of 51'. After sifting through the internet looking here and there i have came across this blog to find mention of my grandfathers stories and would love to possibly find more information in regards to life back then. Anything will truly help and i know this blog may be out of use today but hopefully someone will see this that will be able to help us with our research. This has been a great bonding experience for me and my grandad and i wish to continue in hopes that enough info can be gathered to possibly write a book of our own.

Much appreciated if anyone manages to read this.