What is a WMD? 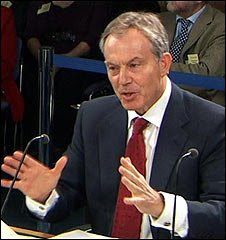 I am not one of those who believes that you solve problems in politics by looking for "true" definitions. But there are times when clarity helps if we are to understand each other.

I, therefore, wish that these two questions had been pursued with Tony Blair at today's Iraq Inquiry - (1) "What did you mean in claiming Saddam Hussein held Weapons of Mass Destruction?" (2) "What did you think that other people thought you were claiming?"

I can appreciate the following point which appears in the Wikipedia entry "Weapon of Mass Destruction" .....the American Dialect Society voted "weapons of mass destruction" (and its abbreviation, "WMD") the word of the year in 2002, and in 2003 Lake Superior State University added WMD to its list of terms banished for "Mis-use, Over-use and General Uselessness".

My own reasons for voting against the invasion of Iraq was that it was highly likely to produce a humanitarian disaster - which is what resulted. I held to this view whatever WMDs were and whether or not Saddam Hussein held them. For if he did not hold them, then Tony Blair's legal case was empty and if he did hold them (and they were dangerous and nasty) then he would surely use them - invasion would be like prodding a mad dog with a stick.

I was, however, a supporter of regime change - as I am with many current regimes in the world. But I believed the best way to achieve this was via people supporting progressive clandestine forces in Iraq who also had support amongst Iraqi exiles. It has since been revealed that Saddam Hussein's hold on power was not as secure as Bush and Blair pretended.

30th January : Then there is this update from today's Daily Telegraph