Not Dead - Only Fired 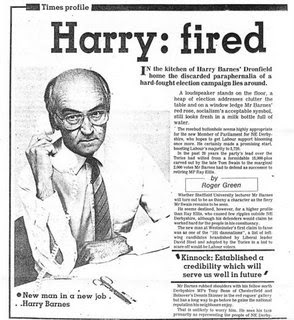 Kerron Cross keeps placing this photo of me on his blog. It was taken nearly 22 years ago. I don't, however, ever remember being fired. In fact I had just been elected as an MP at the time. I didn't even have the whip taken away from me when in the Parliamentary Labour Party, although I tried hard enough. When I wrote a lengthy letter to my Regional Whip to explain why I would be voting against the Labour Government on yet a further issue, he merely told me that I had won that week's Booker Prize.
Posted by Harry Barnes at 11:32 AM

Just for readers over here, of course that should read:

"Harry fired up to fight on blazing issues".

It's laziness on my part to not post both halves of the images again, I'm afraid. :-/

You can read it in all its glory here:

That was a surprisingly witty remark for a whip!

Dave Semple : That is because the Regional Whip concerned was Graham Allen who in 2001 produced this 88 page gem (revised in 2003) entitled "The Last Prime Minister" which is worth any political Booker prize - http://www.amazon.co.uk/Last-Prime-Minister-Presidency-Societas/dp/090784541X