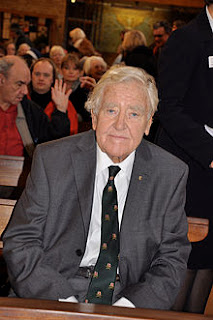 Many fine tributes have been made to the memory of Alf Morris who died yesterday at the age of 84. In particular, he has been remembered for pioneering a Bill through Parliament in 1970 which became the first Act ever in the world to recognise the needs of disabled people. It led on to his being appointed to the post of Minister for the Disabled in 1974 by Harold Wilson. Again he was the first person in the world to acquire such a position. He then continued to pursue the concerns and interests of disabled people for the rest of his life.

I began to know him from 1987 when I was first elected as an MP. He had already served in the Commons from 1964. Under a Conservative Government in 1991, he introduced a Civil Rights (Disabled Persons) Bill. Although this was unsuccessful, it was a key stage in a campaign which eventually led to legislative improvements.  In the 1992-3 session, Roger Berry re-introduced the Bill. Whilst the measure was again defeated, it gained considerable publicity for the cause it pursued. Nicholas Scott (the Government Minister leading the opposition to the Bill) was obliged to resign over the role he played. Whilst Lady Olga Maitland a Conservative MP was obliged to apologize over her tactics in opposing the measure. She had been given a series of amendments to submit against the Bill by the Government, as part of its tactics of holding up progress. Yet both she and Nicholas Scott denied their roles when challenged about these in the Commons. When they were discovered to be misleading the Commons, they had to make recompense.


In the following parliamentary session, I was lucky enough to be in a position to re-introduce Alf's Bill. Then the Government embarrassed by the previous sessions manoeuvrings, also introduced their own measure which was a pale imitation of Alf's. In the end it was the Government's Bill which triumphed, but the hassle between the two measures led to certain amendments and improvements to the Government's proposals. Although the version of Alf's Bill which I had introduced carried its Second Reading by 175-0, it was held up in its Committee Stage by the tactics headed by the responsible Government Minister, William Hague. When the measure returned to the Commons for its Report Stage, it was given little time and with a host of Government amendments to it, its Third Reading was never reached. Alf Morris and Roger Berry, however, played key roles in guiding and helping me to pursue the measure; including their membership of the small Standing Committee which spent six weeks on that stage of the Bill. But above all, it was Alf's Bill that I had taken on board.

When Labour was elected in 1997, Alf moved to the Lords. But he was a key figure in persuading the new Government to introduce and carry Legislation which set up a Disability Rights Commission. The Act was passed in 1998. It has since been superseded and Labour did not fulfil all the aspirations which were contained in Alf's pioneering Civil Rights (Disabled Persons Bill). But what Alf achieved from 1970 onwards improved the quality of life of numerous people - and without him this would not have happened. These days there aren't that many politicians we can say that about.

It was a privilege to have known him and to have run a lap carrying his baton.
Posted by Harry Barnes at 6:43 PM