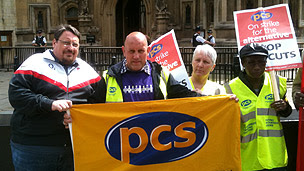 During last Thursday's strike, the Public and Commercial Service (PCS) Trade Union ran what seems to have been a picket line outside at least one of the main entrances to the Commons. One of their justifications for doing this is that they have fellow members of the PCS who work in the parliament building. They may, however, also have been asking others not to cross their picket line, including Members of Parliament. This raises the question of what Labour MPs should have done when confronted by such a picket - especially those who reject Red Ed's criticisms of the strike.

On the day prior to the strike Ed Miliband failed to raise the issue of the dispute at Prime Ministers Questions, although it was the key matter of the day. This gave Cameron the chance to taunt Miliband by asking whether Labour MPs would cross picket lines outside Parliament and other public buildings, and a spokesman for the Labour leader is then reported as saying that Labour MPs "will be coming to work as normal"; although it is not clear as to how many Labour MPs picked up this response.

Labour MPs who spoke in the Commons that day have been criticised for crossing a picket line. No vote took place that day, so those who spoke have been the easiest people to target. But is this targeting justified? There are a number of problems to consider.

(1) MPs using their passes have nine or ten entrances into Parliament. Four of these are major and well used entrances. It must have happened on the odd occasion, but in the 18 years I was an MP I can not once remember arriving at the Commons for a day's work via the entrance shown on the above photo. So many MPs could have arrived in the Commons on the day of the strike without observing the pickets.

(2) Many of those who have avoided being targeted were either (a) present in the parliament building, but did not speak in the Commons or (b) never turned up to enter the building as it was likely that there was no three-line whip that day. A few might have joined the strikers in their constituencies. But, unfortunately these would be few and far between. Many would just be AOL for reasons that had nothing to do with the strike.

(3) A handful had important matters to pursue in the Commons on behalf of their constituents and/or in the wider public interest. This is the main reason that we have a Parliament and a democratic franchise fought for by movements such as those of the Chartists and the Suffragettes. This point still stands even though the Commons and the use of the franchise often fails to meet up to the standards they should.

This third category include (a) John Cryer who contributed fully and well to a debate which directly effected the interests of his constituents and whom is, I assume, a solid supporter of the strikers, (b) Louise Ellman who had obtained a debate organised to discuss the dismissal of employees at Liverpool Passport Office and (c) Tom Watson who pursued an urgent question on the acquisition of BSkyB - a matter whose considerable public importance can be seen in today's media coverage.

When two principles clash, we need to look for the best way around them. Most MPs who supported the strike could have been away from the Commons giving backing to the action. But being away from the Commons for the full day was not a reasonable option for John Cryer. We need more John Cryer's not fewer. I would, therefore, hope that MPs such as John McDonnell and Jeremy Corbyn who refused to cross the picket line, would now ask PCS (etc) to modify there tactic in future. If the Commons is picketed, the picket line should not be directed at stopping the entry of MPs; but should instead seek to gain support from MPs. A support which can always be delivered (in part) inside the Commons itself.

Here is how one person responded to a similar dilemma, although it is about entering Downing Street which seems to me to have a lessor democratic importance than the Commons should have. On 23rd February 1979 during the Winter of Discontent, the Secretary of State for Energy recorded in his diary "Pickets were standing at the end of Downing Street. One picket looked through my car window and asked if he could speak to me. The driver went on but I stopped him and got out. I assured (the pickets that) I was not going in to do their job or replace their work, and I went in. I sat down at the table outside the Cabinet Room and worked on my papers...." (Tony Benn).
Posted by Harry Barnes at 1:53 PM

If the party had a couple of hundred John Cryers then I would be a happy man.

It was a sad day for me when he lost his seat in Hornchurch in 2005 (he was of course Havering's only Labour MP at the time). He was an excellent constituency MP and now is again I am sure.

jams o donnell : John and I were fellow MPs during the period he represented Hornchurch from 1997 to 2005. He was first rate and I was pleased he made it back into the Commons. I have only met him once since I retired. When he represented Hornchurch, my son and I went to see Hayes United (John McDonnell's team) play at Hornchurch, but unfortunately neither of the Johns could not make it that day. The last time I saw John McDonnell was as we moved to different ends of the ground outside Fulham's ground. I was heading for the away end with my son and six year old grandson to support Sunderland - honours even.

For us, although MPs may well have not literally crossed a picket line, in terms of the spirit of the issue they did. We do also understand both that the list is incomplete, at the moment neither of us has the time or inclination to trawl through hours of BBC Parliament to identify other miscreants, and that some Labour MPs not in Parliament on Thursday may not have had the most noble socialist motives for this.

On the more substantive point, whilst we accept that there is a difference between the importance of Cryer's contribution and, for example, Barry "should we rename veal spring beef" Sheerman, there's still a pretty substantial problem here. Whilst it is obviously important that MPs pursue matters in Parliament, it strikes us that an unconditional principle has been violated (if it's unconditional, there should be no question of balancing it with a competing principle). It's also worth noting that the principle that MPs should work hard for their constituents is widely accepted (at least by the public); principles of unconditional solidarity are being made to appear anachronistic (the GMB, for example, suggested crossing picket lines was an issue of individual conscience, it isn't), this makes fidelity to this principle particularly vital at the moment.

The question on PCS tactics is an interesting one. What we'd suggest is that the Kantian distinction between the public use of reason (one can criticise taxes as much as one wants) and the private use of reason (one still has to pay them) applies here. One can criticise a union's tactics as much as one wants and try to influence them but once they are democratically agreed on one's bound as a socialist not to disrupt them.

The Partisan : For my reply see - http://threescoreyearsandten.blogspot.com/2011/07/reply-to-partisan.html