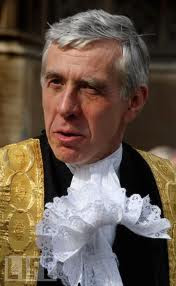 I am glad you are back again and with a subject close to my heart.

This Jack Straw and David Davis "joint enterprise" is a sideshow.

The main event is this...

At the Parliamentary Assembly of the Council of Europe (PACE)

The Assembly, in particular, urges the following states to give priority to specific problems:

The United Kingdom must put to an end the practice of delaying full implementation of Court judgments with respect to politically sensitive issues, such as prisoners’ voting rights.

... it is essential that states parties fulfil their obligation under Article 46 of the Convention to ensure the full and rapid implementation of judgments of the Court.

The execution process for some of these judgments (where it has begun) has become somewhat politicised at the national level and consequently the JCHR has identified what it perceives as an emerging practice of “minimal compliance’; where some action has been taken by the United Kingdom but far from enough. This has been highlighted by the JCHR as a problem in that it increases the possibility of repetitive cases by failing to put an end to a root problem, thus creating further litigation.

More information on this For several years the Parliamentary Assembly has tried to contribute to the effective implementation of the judgments of the European Court of Human Rights, by bringing parliamentary pressure to bear on governments where worrying delays in complying with judgments have arisen. In this 7th report, the Committee on Legal Affairs and Human Rights has given priority to the situation in nine states where major structural problems have led to many repeat violations.

Thanks John. I will pursue what you tell me with interest. You will see that I have today added a blog item which further explains my position. The whole of the debates around the topic will show us if there are any politicians left who hold to democratic principles. Or if all that we are left with are people who will whip up bile and spite to try and grab some passing and short lived popular support - rather than seeking to lift and expand people's horizans. You have done a fine job in pursuing your concerns.

Yes I have seen it. And will read and digest later because I have had only 4 hours sleep in 2 days. Loads of media interviews.