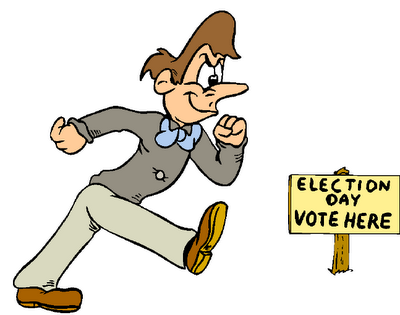 The Electoral Commission estimates that some 3.5 million people who are eligible to vote are missing from electoral registers. That is almost 7% of the potential electorate. It is just assumed by many that we long since achieved a full franchise, but this has been in serious decline for a considerable period as we became a more mobile and, in many cases, a highly rootless society. There has also been a falling away of interest in Party politics, so registration although a legal obligation is low down in the priorities of many. The numbers missing from electoral registers are highest amongst those living in bed-sitter land, the homeless, the poor, ethnic minorities and the young.

Until the 20 April there is a brief opportunity for those who aren't yet registered to correct this. The avenues for doing this can be found here and here. This is only likely, however, to place a small proportion of the missing 3.5 million onto registers.

At one time it would not even have been possible for people to have qualified for late electoral registration. For the deadline for registration was set for a date in October, with the registers not coming into operation until the following February. This wasn't altered until 2000 when what was known as "rolling registration" first came into operation based on a number of unsuccessful Private Members Bill I introduced into the Commons from 1993 onwards. The "rolling register" principle was extended during the parliament which has just ended, allowing registration as late as 11 days before a General Election.

Even under the current arrangements, the polling cards should have been posted to voters by now. With publicity, this would have shown those who did not receive a card that something might be wrong. They would then have 11 days left to ensure their registration.

For other franchise problems see my earlier analysis - although I underestimated the number of those not registered.
Posted by Harry Barnes at 4:52 PM

Harry: I draw your attention to this...

Prisoners Voting Rights in the House of Lords

jailhouselawyer : Thanks for the link. Lord Bach raises a set of technical problems which can be easily resolved once the principle of votes for all adult citizens (apart from the seriously mental disabled) is accepted. We need principled politics.

Harry: "We need principled politics". That sums it up. Lord Bach is a unprincipled scoundrel! Every other country in the Council of Europe has resolved the technical problems, so there really is no excuse for the UK!

I see that the Constitutional Reform and Governance Act has now got the Royal consent. And yet, several members of the HofL stated that they did not have the opportunity to debate sections of it.

jailhouselawyer : A Blair appointment. I only remember meeting him once when I took a deputation to meet him from a works in Chesterfield when he was a Defence Minister.I had Constituents working there who were worried about their job security. Unfortunately, we got nowhere.