Michael Martin And Me 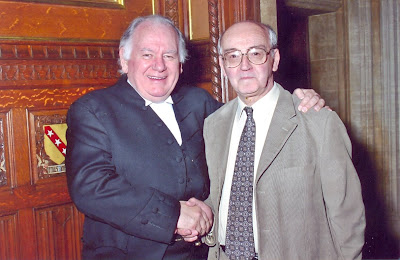 I owe a considerable debt to Michael Martin. He played a major role in helping to save the few brain cells I have left when I had a stroke in the Commons in 1998.

He was Deputy Speaker at the time and when he saw the condition I was in he immediately helped me into his car and rushed me to the Accident and Emergency provision at St. Thomas's Hospital.

He brought Dennis Skinner with him. It was late in the day as the Commons' was moving towards its adjournment, yet Martin and Dennis kept a watch over me in the hospital for two hours until my son had been contacted and travelled to St Thomas's to take over the vigil.

I have others that I am greatly indebted to at that time. These include Dennis who also contacted my wife by phone and an attendant at the Commons' Chamber who looked after me and helped me down difficult flights of stairs. Then there was, of course, the magnificent staff at the hospital and the attention of my son and of my wife. Ann quickly made it from our home to London, not just to help me with my physio exercises but to take over as my Constituents' de-facto MP for several weeks.

Yet the person who took determined action at a crucial stage was Michael.

I hope that it is not just from a sense of gratitude that I resent the fact that lesser parliamentarians helped to hound him out of office when they foolishly thought that this would help save their own embarrassment. They did not know that when you try to feed someone to the wolves, that it only makes the animals more bold.

Michael handled the Commons' far differently than seen from the edited TV snippets which were used against him recently. He mixed with MPs at Westminster in a way that no Speaker in history has ever done, for he broke down the barrier that had hidden his predecessors within the Speaker's quarters. When he held receptions and meetings in his own rooms he acted with dignity, intelligence and kindness and always brought the best out of others.

He has my eternal gratitude. This might not matter for most people, but I hope that in a small way it matters to Michael - as it does for me.
Posted by Harry Barnes at 11:55 AM

I was sorry to see Michael Martin forced out of office mainly, in my view, by snobs and traditionalists such as the sketch writers of the Guardian and Mail along with a raft of (mainly Tory) MPs.

To illustrate that I'm not a Johnny come lately on this matter, I had a letter in the New Statesman when he was appointed in which I had a go at the snobs and welcomed him as a breath of fresh air.

I shall miss the twinkle in his eye and his good sense. I hope he has a happy retirement.

Hughes Views : I am sending Martin a copy of this thread by post, I will ensure that your comments appear on it also.