Ed's Hat Trick Of Own Goals 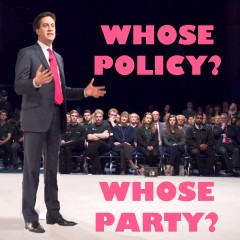 The following is from today's Sunday Times (well from a piece you can get free from their web-site).

ED MILIBAND’S policy chief has launched a coded attack on the Labour leader for creating “cynical” policies designed only to “chime with focus groups”.

He attacked Labour’s plans to cut jobseeker’s allowance from those aged 18 to 21 unless they undergo training as “punitive” and suggested welfare cuts had been adopted only to placate the media and floating voters.

At a meeting of the left-wing pressure group Compass last weekend, Cruddas complained that plans drawn up by Labour’s policy working groups had been “parked” by the leadership and replaced with “cynical nuggets of policy to chime with our focus groups and press strategy”.

We now have had (1) the fiasco of Ed Miliband's support for the Sun Newspaper (see here),  (2) his attack on welfare provisions for 18-21s (see both here and above) and now (3) the "parking" of Labour's review procedure for something entirely counter-productive.

So we now have a hat-trick of own goals by Ed being unearthed in the past week.
Posted by Harry Barnes at 10:30 PM

Sadly, but predictably it seems, those in the Labour Party, like John Cuddass, who are serious about tackling social exclusion and really do want a fair (one nation) society, are in the process of being steam-rolled out of the way by the dead hand of the Blairites and Labour’s free market apologists.

Westminster politicians who pay lip service to the needs of those in poverty and the working class people they claim to represent, and whose end game seems to be power and whose preferred method of getting there being political spin and Buggins-Turn.

While compromise and playing to the medial gallery and focus groups is the name of the game, it seems, these same Labour politicians have collective amnesia about the privatisation agenda, outsourcing of jobs, the financial crisis, growth in inequality, food banks and the austerity legacy of the Blair/Brown administrations and their own roles in the neoliberal horror story.

Ernie : There are a number of serious hurdles in front of us. (1) What will be endorsed by the coming Labour Party Conference as policies following the consultation procedure which ended on 13 June? (2) What will then emerge in Labour's General Election Manifesto and how far will it reflect what was adopted at this year's Conference. (3) If somehow Labour win the General Election with a clear majority, how far will it act on its Manifesto promises if some of these just happen to be directed towards the interests of the unemployed and other impoverished people? (4) If Labour are drawn into a coalition government,what will be the terms of the agreement? (5) If Labour lose, will any drametic changes take place in its operations and in which direction? (6) If what then emerges is just a further series of set-backs, will it finally be time to abandon Labour and to seek to build an alterative democratic socialist body - if so, with whom and how?

When we next have discussions in Sheffield, we should be pursuing the above agenda.

Lots of if’s there Harry, but all of them are very real possibilities and from my (our) perspective more of the same and not very encouraging and with no easy options.

Sometimes it would be nice to be like the SWP and we could call for a general strike and blame it all on the cowardice of Labour Movement leaders and the lure of big money. If only it were that simply?

Having said that, there are people in the Parliamentary Labour Party like John Cuddass and John Mann, et al, who do favour a one nation, social democractic (predistribution) economic strategy and who might well support a compulsory living wage as a means of rebalancing the economy, dealing with the credit crunch and as a first step in helping to regenerate deprived neighbourhood communities.

Likewise on issues like housing and financial services the unfairness and idiocy of the present system is unbelievably mind-boggling obvious and in need of radical reforms, (social housing programmes, caps on interest rates, state support for credit unions, etc.) which should appeals to large numbers of people inside and outside of the Labour Party and within the country at large.

But there again, it’s the ILP long haul again and as Barry emphasised in his unbalanced Britain presentation:

“It can’t be done all at once, and it can only be done by working with others to encourage public support and participation, both within and beyond the political mainstream. Progressive parties need radical movements and progressive movements need radical parties.”

Ernie : I first joined the Labour in 1957, but not with any great enthusiasm. But at least, I could associate with Bevanism inside the party and with the early New Left (across the wider spectrum), as providing hope for the future. Up to the era of Blair, there were always clear avenues to be involved in to press democratic socialist concerns - including the ILP when it returned to the fold.

Under Blair the soft-left around the parliamentary Tribune Group almost entirely moved into the New Labour camp. The only form of refuge I had in the Commons was in the Socialist Campaign Group - but I often disagreed with it on specifics. Then there was always hope that when New Labour stopped delivering electoral victories that the left would find itself becoming more influencial. But that does not seem to be happening - even according to what has slipped out from Cruddas.

I am still very active in the Labour Party and have even taken over the role of Branch Secretary in a busy bureacratic period where we are selecting 14 District Council Candidates across the area of the Branch. I have concentrated on little else over the past month.

But after being involved in the long haul for the past 57 years, the Labour Left now seems to me to have been almost pushed back into oblivion. We now seem to be very much at the Last Chance Saloon. There is at least a case for examing what we can do. Is it any longer good enough just to plod on and to keep taking the tablets?

All I want is to share these concerns with others who otherwise have similar horizans. I don't think that I am becoming impatient due to age. I think whatever age we are, democratic socialists should realise that we have entered Labour's Last Chance Saloon. Even if there is just a wilderness around us, do we just stay inside hoping that the cavellry will arrive - from where?