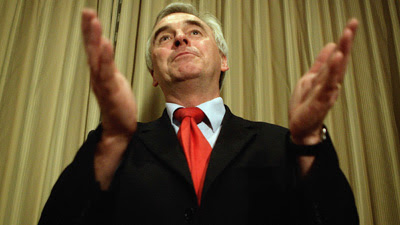 John McDonnell has come top of the ballot. Well it is called a ballot. It is really a raffle. He has the first spot for a Private Members Bill in the new Parliament. I know that he will make good use of his opportunity to have a full Second Reading Debate on the measure he chooses. What of a law to say that those nominated for the leadership of a political party should only require a minimum of 5% support from their nominating body? It's OK I know that he is more seriously minded than that.

He could go for a Bill to see that the 3 million missed off electoral registers are properly registered to vote. From experience I know that it is a matter than can gain cross-party support and the Labour Leadership candidates would all feel obliged to support him! I even had Tony Blair in the lobby to support me when I tried something similar back in 1993 - although he seemed to lose his way afterwards.
Posted by Harry Barnes at 4:53 PM

Either of those would be great Harry.
In the absence of a proper constitution we need a law requiring all political parties to be internally democratic - i.e
1)One member one vote for all elections and votes on policy in the party (no electoral colleges, no block votes, no MPs' votes counting for thousands of times as many votes as ordinary members)

4) In multi-member constituency or regional PR elections all party members in the multi-member constituency or regional list area must be allowed to vote for their preferred candidates for the election. The candidate with the most votes will be first on the party list for that PR election. The candidate with the next most votes will be second on the party list and so on.

This will eliminate the supposed problem of PR letting party leaders decide which candidates have a chance of getting elected (which is really no different from the problem under first-past-the-post of party leaders or Central Office giving safe seats to their favoured candidates and marginals or no-hope seats for their party to their opponents in the party ; or their tendency to veto candidates chosen by constituency parties and impose their own).

The bill to get the 3 million people missing from the registers the right to vote again is equally important, but i'd prefer the bill to require internal democracy into political parties, because without it many people will justifiably continue to feel alienated from political parties and powerless.

Dunc : This is what John McDonnell has said he will introduce in his
winning spot for a Private Members Bill -

“It’s a funny old world, as one door closes another one opens. Coming top in this poll will enable me to tackle an abuse of the current employment laws by employers that I have tried to reform for the last 4 years. ”

“As we have seen in the current BA Cabin Crew dispute and many other recent disputes, employers have been able to exploit a loophole in the existing law by using minor technical errors in a trade union ballot for industrial action to frustrate the democratic decisions of trade unionists who wish to take action. This resort to the courts by some ruthless employers is bringing current employment law into disrepute and undermining industrial relations in this country. The courts are being dragged into disputes and used as weapons in the hands of bullying employers.

“Even where there have been overwhelming majorities in ballots in favour of strike action, minor technicalities which would have no material effect on the outcome of the ballot, are being exploited to negate the democratic decision of the trade unionists involved. This cannot be right and in the interests of good industrial relations needs to be addressed.”

He is seeking to tackle a democratic deficit in the industrial field.