Those Were The Days

From 1966 to 1987 I was privileged to be a tutor on Industrial Day Release Classes which were run by the Sheffield University Extramural Department (during that time its name was changed to that of the Division of Continuing Education).

In Chesterfield we ran classes for Derbyshire Miners which lasted over a three year period. In the first year of their studies Miners attended classes for a day a week over a 24 week period concentrating on Industrial Relations issues, whilst developing their Student Skills. In the second and third years of the course they attended classes for two days a week. One day was devoted to the study of economics and the other to politics.

No exams were set on the courses and no qualifications were issued. Numbers of students moved on to full time education at Adult Education Colleges taking Diploma courses at Ruskin (where I studied from 1960-62), Coleg Harlech and the Northern College. They often then went on to study for University Degrees. Many others took up positions in the NUM or became active in other forms of public service, such as local government. Eric Varley and Dennis Skinner entered Parliament.

The students borrowed and purchased recommended books and engaged in studies in their own time, producing serious written work. When I later became an MP I missed the atmosphere of the Day Release classes. For whilst many MPs are bright, their trade is that of persuasion. In contrast the interest of the Day Release Classes was precision and an understanding that he who only knew his own side of the case knew little of that. 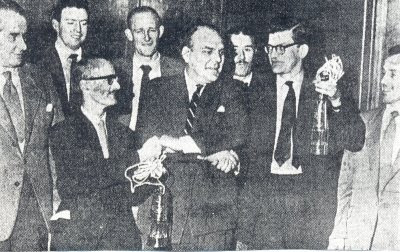 A group of Derbyshire Miners are shown in the above photograph. They completed their three year Day Release Course in 1960, six years before I joined the Extramural Department.

The photograph appeared in the Derbyshire Times on 7 May, 1960. The students are presenting Miners' lamps to two of their tutors, who are the men wearing glasses. On the left is Noel Williams of the Workers Education Association who taught economics and on the right is the politics tutor Royden Harrison from Sheffield University Extramural Department who was a leading Labour Historian and whose final book was to be "The Life and Times of Sidney and Beatrice Webb : 1858 to 1905 the Formative Years". From left to right the students on the course are (1) Les Ralley who became a leading figure on both his local District and Parish Councils, (2) a 27 year old Eric Varley who four years later was to embark upon his parliamentary career, (3) W. Whitaker, (4) E. Lawrence presenting the lamps, (5) E. Bradbury and (6) N. Wade. Further information about Whitaker, Bradbury, Lawrence and Wade would be welcome.

Memories about those days will emerge at the following meeting which is to be held at one of the main venues where the Day Release Classes were run. The meeting is also likely to reveal the significance of a form of study which has mainly been lost to a new world of Adult Education which is too often restricted to vocational studies, modules and starts out with only a quest for qualifications.

Hurst House, Abercrombie Street, Chesterfield (see this map)
2 pm (Doors open 1.30)
John Halstead, one of the course tutors, will explain briefly
- How and why the course began
- Its main features
- Impact of the day-release programme

Then those present who attended the programme will be able to share their experiences.

Please note that there is parking for disabled people only at Hurst House.
Long-stay parking is available nearby at Holywell Cross surface car park or the multi-storey car park.