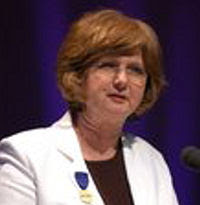 Urging trade union members to email their protest to the Iraqi Ambassador, Sue Rogers the Chair of the TUC Iraq Solidarity Committee and Treasurer of the Teacher Union NASUWT said:

'The Iraqi Government is acting like Saddam Hussein, treating unions as the property of the state. Iraqi trade unionists and teacher trade unions around the world are outraged at this latest attempt to seize control of our sister union.The Government has demanded that the union hand over the keys to its buildings, its membership lists, and is demanding that the existing leaders stand down or face jail sentences of three to seven years despite doing nothing wrong. This is a breach of fundamental human and trade union rights. The Iraqi Government must not be allowed to act in this dictatorial way.'

Sue Rogers is leading a TUC delegation at a workshop in Erbil, Iraq for trade union leaders from all over Iraq and Iraqi Kurdistan. Yesterday Iraqi trade unions issued a joint statement of solidarity with the ITU, who have angered some in the Iraqi administration by securing substantial pay rises for teachers after a series of strikes and demonstrations last year.

The statement, signed by the leaders of the main Iraqi trade union confederation and the two Kurdish confederations, as well as the Kurdish Teachers Union and the powerful oil unions of Southern Iraq, appears below.

ITU President Jasim al-Lami, who has been invited to the NASUWT conference this April, was yesterday travelling back from the workshop to meet with Ministers in Baghdad. Mr al-Lami was jailed for six years in Abu Ghraib under Saddam Hussein and says he is ready to face jail again to defend his union.

Protests by global trade unions have already been lodged with the International Labour Organisation which last year censured Iraq for its anti-union laws, some of which have been left over from Saddam Hussein. The TUC has also written to Ministers in the UK.


Erbil Declaration of Solidarity with the Iraqi teachers' union

We, the leaders of the trade union movement throughout Iraq - including Iraqi Kurdistan - meeting with our international colleagues in Erbil, condemn the harassment and threats directed at the Iraqi Teachers' Union and their democratically-elected leaders.

This action is an attack on fundamental human rights and contrary to your Government's obligation to uphold the ILO core conventions, including Convention 87 on Freedom of Association.

We reject your attempt to seize the union and express our solidarity with the membership and leadership of the Iraqi Teachers' Union.

Failure to respond positively can only result in a major campaign - across Iraq and around the world - to highlight your Government's appalling action.

We are copying this letter to the President and Prime Minister of Iraq and making it public.


There has also been an additional attack by the Iraqi Government on the operations of the Iraqi Agricultural Workers Union as shown here. Add your protests on this to your email to the Iraqi Embassy.
Posted by Harry Barnes at 1:58 PM

Nadia : I posted an item linking to your important coverage on Iraqi widows.

Thanks for the shout out.

I read a little while back that oil workers were still officially banned from forming trade unions, I was hoping it was just an oversight left over from the last regime but this really does not look good.

Nadia : Under its federal powers Iraqi Kurdistan recognises fully free Trade Unions, but in the rest of Iraq they face official interference from two sources. (1)Trade Unions are banned in the public sector by decree 150 introduced by Sadam Hussein in 1987and never repealed - most Iraqi jobs are in this sector ; (2) all Trade Union funds are subject to take-over by the State under decree 8750 issued on August 2005 until the State decides who it will recognise as being a Trade Union. This effects all Trade Unions outside of Iraqi Kurdistan including the Basra Oil Workers, the large Teachers Union and their TUC, the General Federation of Iraqi Trade Unions.

Thanks for that, completely not surprising, but still very disturbing.