Trade Unionists Arrested For May Day 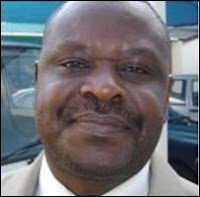 Wellington Chibebe (opposite) and Lovemore Matombo (see this video) are respectively General Secretary and President of the Zimbabwe Congress of Trade Unions. They have been detained in Harare for exercising their rights to make May Day Speeches.

Here is the letter of protest to Zimbabwe's Ambassador from our TUC, dated 9 May.

On behalf of the TUC General Council, I write to express our deep concern over the detention of the leaders of the Zimbabwe Congress of Trade Unions (ZCTU) on 8 May 2008 in Harare.

Our information is that Mr Wellington Chibebe, General Secretary of ZCTU and Mr Lovemore Matombo, President, were both detained at the Harare Central Police Station in connection with the speeches made by them on May Day. We have also learnt that they have been charged with inciting people to rise against the government and spreading falsehoods about the current political crisis in your country.

The detention of trade unionists for organizing activities relating to the exercise of their legitimate rights constitutes a gross violation of the ILO Declaration of Fundamental Principles and Rights at Work. Moreover, your country, which ratified Convention 98(1998) and Convention 87 (2003), is obliged to observe the workers' rights enshrined in them. This incident will, no doubt, tarnish the image of your country and further aggravate the current problems, making national dialogue and reconciliation even more difficult.

We urge you to pass on our deep concern over the safety of the colleagues to your Government, use your influence with the authorities to secure their immediate release and ensure that all Zimbabweans are allowed to exercise their democratic rights without interference from the State.

Yours sincerely
Brendan Barber
General Secretary"
Posted by Harry Barnes at 11:15 AM